Birding In and Around Houston in the Heat of August

I'd love to say that birding the neighborhood parks around Houston was a bonanza of new bird sightings for the year, but alas that was not the case.  In four mornings of profuse sweating I was only able to add five species to the year list.  To be fair, birding in August is pretty slow anyway, and there were not even 20 species seen within an hour's drive of Houston in the past week that I had not yet counted this year.

All that being said, and despite the heat and the oppressive humidity each morning I birded from abut 7:30am to noon-ish, I did see a lot of nice birds and and even added an unexpected Lifer,(though not ABA, yet), a Red-vented Bulbul.

The first morning in, though, I was after a Least Grebe.  I headed to El Franco Lee Park, about a half hour Uber ride from my hotel in Houston,(there were no Zip Cars available nearby that morning).  As soon as I stepped out into the humid morning air, I was dripping with sweat and both my binocular and camera lenses were completely fogged up.  I walked out to the boardwalk and gazebo, where the e-bird reports said the grebes had been seen, and I thought I had seen the grebes but lost them in the fog of my lenses.  I always have my microfiber lens cloth with me, as it is litterally built into my SCOTTeVEST birding vest I wear whenever I'm out in the field.  By the time I got my lenses cleared I had forgotten where I had thought I had seen the Least Grebes and it wasn't until another birder dropped by, on her way to work, to look at the grebes herself, that I was pointed in the right direction, which is exactly where I had been looking when I first arrived.  Great looks at the adults and one of the juveniles with its cute striped head. 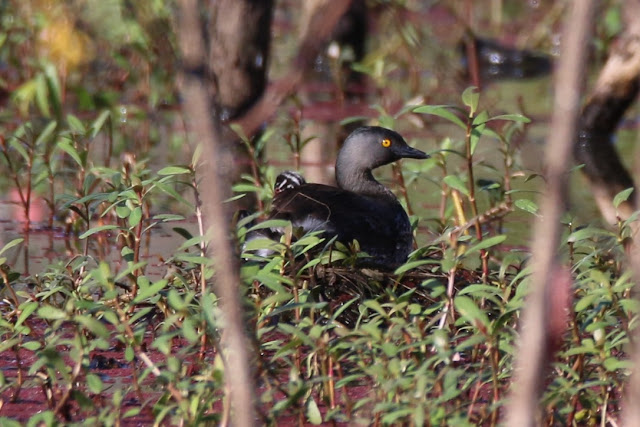 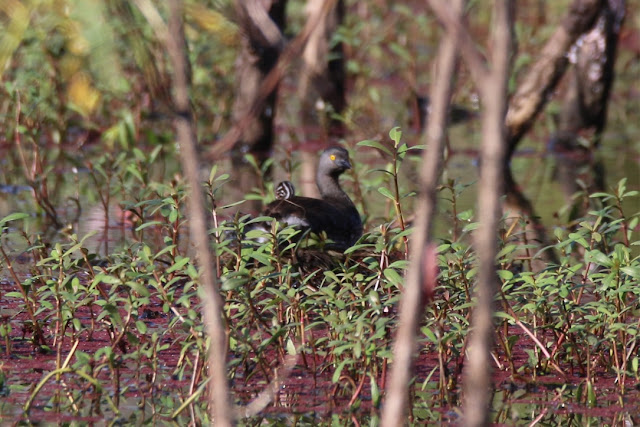 The next morning I was able to get a Zip Car, but had to take an Uber to get to it, as the closest one was nearly three miles away.  I headed to Tanner Marsh hoping to find Cave Swallows, but once again found no swallows, but a large contingent of Black-bellied Whistling Ducks instead.  Couldn't even get Fulvous Whistling Ducks. 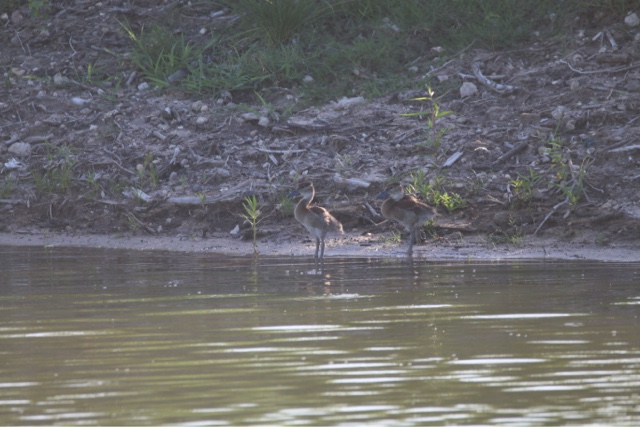 I next headed over to both Woodland Park and White Oak Park, again a location where perhaps Cave Swallows might be, and made an unusual discovery, certainly one I never expected.  In both parks I found a black bird with a little red under the tail feathers.  The first one I didn't get a good look at and the photo wasn't much to look at so I figured I'd look it up later.  I thought it was likely just a grackle in odd morning light.  WhenI got to White Oak Park, I birded near the bridge looking for Cave but only found, again, Barn Swallows.  I did, however, add Neotropic Cormorant to the year list. 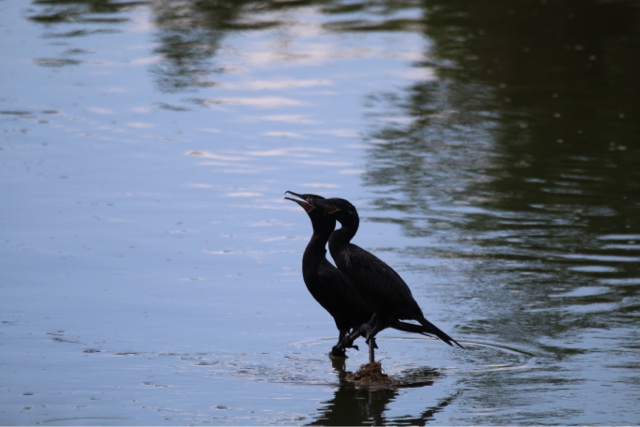 As time was running out and I had to head to the ball park, I was looking at a couple of Kingbirds, listening to their call, hoping to hear Tropical Kingbird, but it was a Western.  However, on the tree right to it, was this big black bird with the red under the tail.  There were no birds in my iBird App that matched in a a Texas search.  Sue suggested that it looked like a vented-"something" so I looked up "vented" birds, and it was a perfect match for a Red-vented Bulbul.  A Hawaiian bird.

However after doing some research and sharing the photo with Susan Billetdeaux from TX RBA, she confirmed that Red-vented Bulbuls are countable in the Houston area as an Established Exotic, just as the Red-whiskered Bulbul is countable in south Florida, say.  But whereas the Red-whiskered Bulbul is on the ABA List, the Red-vented Bulbul has yet to be added.  So a Life bird,(929) and Year bird, but not an addition to my ABA List. 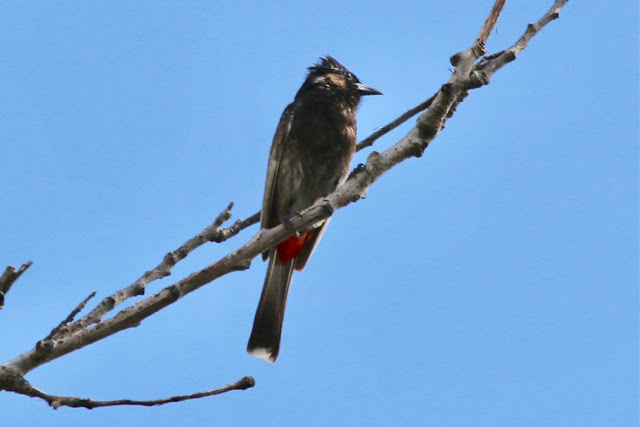 Day three in the Houston area saw me head to David Estates Road Estuary.  A lovely body of water directly across from a garbage dump.  Somewhere near by there were, you guessed it, Cave Swallows reported on e-Bird.  But first, the estuary.  When I got out of the car and saw the water and all the wading birds stretched out before me, on a perfect morning, it made me remember why I love birding.  The view is why I bird.  The places I end up, after driving into the middle of nowhere, trusting e-Bird and GPS directions. It was as close to a Zen moment as I ever get to.  Just me and the birds and, well the cows and cow pies.  And a cat.  Oddly, no bunnies. 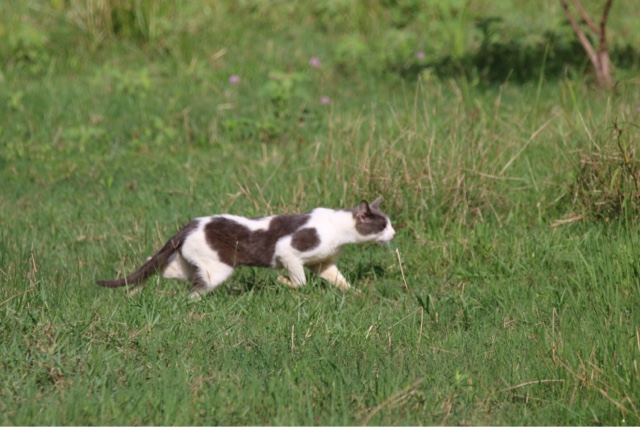 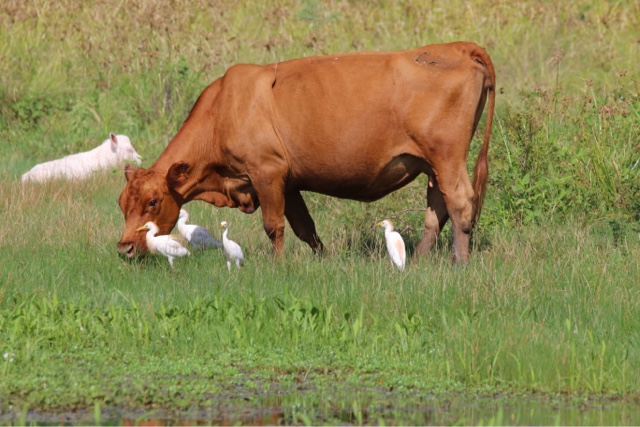 I did avoid walking in enough cow pies to spot some Fulvous Whistling Ducks to add to the year list, and then headed back to the bridge where, once again, it was all Cliff Swallows.  I was bound and determined to get Cave Swallows this trip, the final day in the Houston area saw me head out of town to Galveston, in search of both Cave Swallows and a Gull-billed Tern.

This time I got my zip car closer to the ballpark so I could just walk to work after dropping it off.  The drive to Galveston was pretty nice and  on the road to Galveston there is a series of parallel bridges along Red Bluff Rd in Pasadena, and there, at Big Island Slough, I finally found my Cave Swallows.  About a dozen of them flying back and forth across the 2 lane divided highway and under the bridges.  Took a while to confirm they actually were Cave Swallows for a change and even longer to actually get photos. 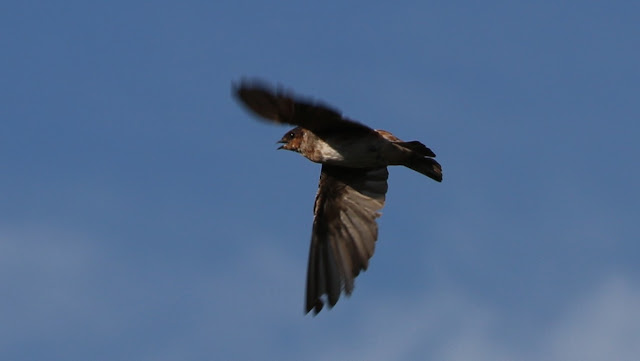 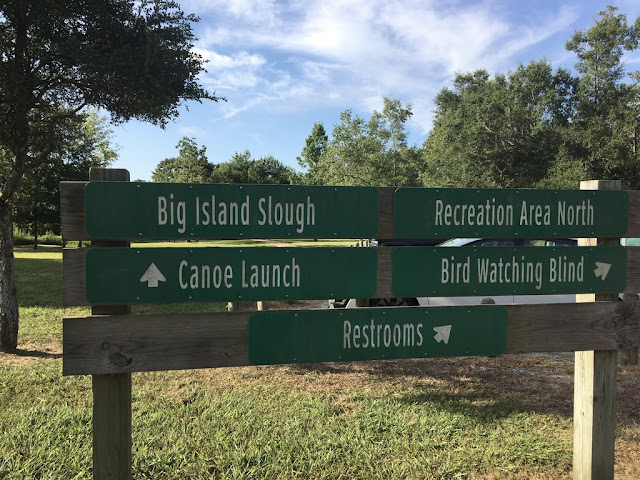 From there I headed into Galveston and to  8 Mile Rad, which I didn't measure to confirm the distance, in search of a Gull-billed Tern.  Lots of shore birds, herons, one flying and diving tern I had to get a photograph of to identify.  I had hoped I had my Gull-billed Tern, but it turned out to be a Least Tern.  I was running out of time so drove round the different waterways hoping to find my target tern.  No luck but I did find Common Nighthawks lined up on the wires like so many pigeons.  But no Gull-billed Tern. 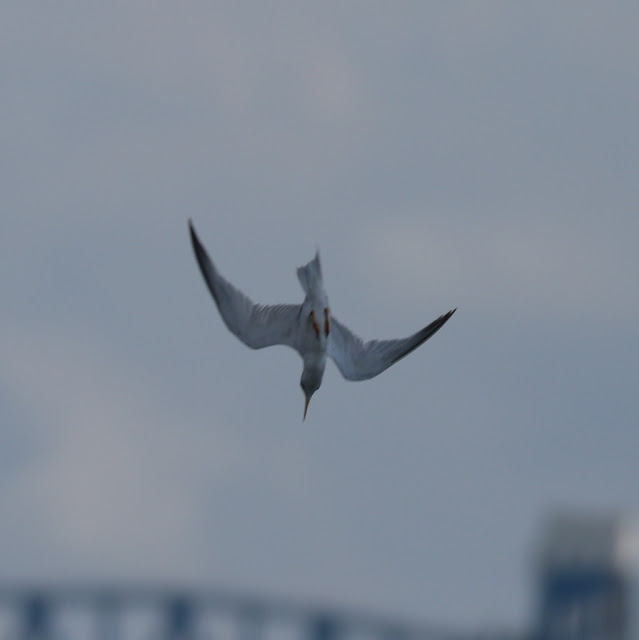 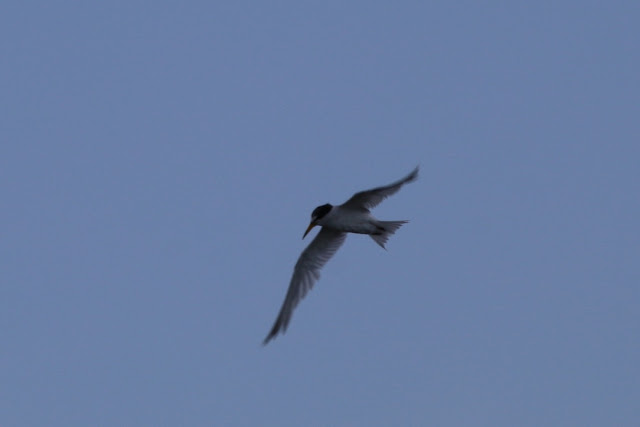 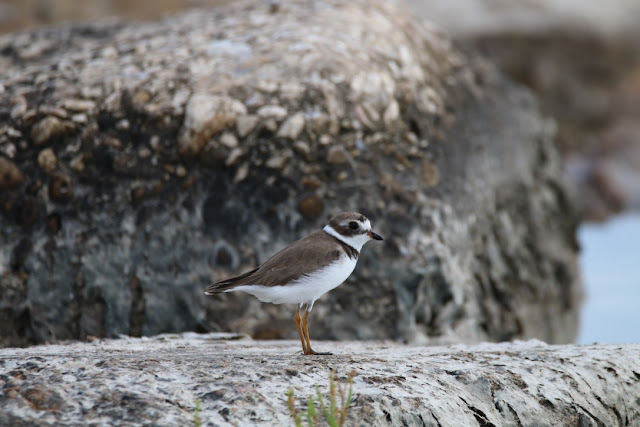 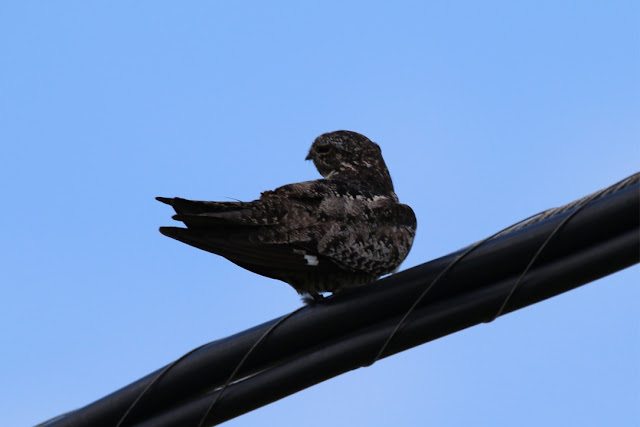 After that it was off to Kansas City with very limited time to go birding.  I did bird around the river along Ward Parkway downtown, and the Gorman Discovery Center where they have lots of natural gardens and feeders to attract a nice variety of birds.  The only park I had time to get to on Saturday morning was Legacy park about half an hour from downtown Kansas City, but alas I was unable to add any new year birds.

So I head home to Toronto for the next 7 days, with 371 for the year and a trip to the West Perth Wetlands,(really a sewage lagoon), planned for next Thursday, which is my only day off this coming homestead.  West Perth Wetlands is where I saw my first Hudsonian Godwit during my 2012 Big Year.