Starting in California with the High Sierras and moving on to Sierra Vista in Arizona this has been one of the trips I've been looking forward to all year.  And with Thursday in California and Monday in Arizona official Off Days I was able to rent cars and explore further afield.

So, starting on Monday morning I headed out from San Francisco up highway 80 toward Bassett and Bassetts Station, a combination hotel, restaurant, gernaral store and Hummingbird Feeding Station.  Why not?  I was after a Calliope Hummingbirds, and, naturally, the first bird I saw was an American Robin.  I found the feeders and about a dozen Rufous and Anna's Hummingbirds were coming to the feeders but no Calliope.  Since it sometimes takes about 20 minutes between feedings, I decided to hike up the hillside extending from the station and, more robins.  But then on my way down to the feeders, something scuttled in the brush.  Then it called, then I saw a flash and it flew into a tree.  I didn't see it again until it flew back across the river, but about 5 minutes later I found a Mountain Quail.

I headed back down to the feeders and within a few minutes a Calliope showed up, particularity easy to pick out next to the "regular" sized hummingbirds.  3 new species for the year and I was off to the SFSU Sierra Nevada Field Campus, in hopes of finding an American Dipper and Cassin's Finch,(a lifer).  There is a little bridge at the campus and there I should have found the dipper.  However, though it had been seen in the morning, I was not to find it.  However, over the 90 plus minutes I was there I did find the Cassin's Finch, ABA 648 for me.  I talked to some interesting people there who are spending the summer studying butterflies and insects, but, interestingly, not birds.  Though I missed the dipper I did add a Golden Eagle, Red-breasted Sapsucker, Hermit Warbler, and Evening Grosbeak to the year list.

I had a lot of places I could have stopped at along the loop up 80 to 49 and across to to 89 and back down to 80, and had I spent limited time at each stop, I might have had a chance to visit all of them.   Trouble was, I was enjoying each spot so much I lost track of time, and by the time I got to the Yuba Pass it was getting late in the day.  The drive was spectacular too, with stunning views that threatened to have me drive off the road.  Luckily, unlike some of California's mountain roads, there were not shear drop offs to scare the wits out of me as I drove.

Up at the campgrounds of the Yuba Pass I added a Dusky Flycatcher to the year list, but nothing more as I made my way back down the mountains to San Francisco.  The next morning I was up bright and early to go for a half day of birding with Eddie and Noreen of NatureTrip.  We started at Fort Mason and found several female and young Hooded Warblers and a visiting Summer Tanager, who was hanging out near a Western Tanager, likely the same one we saw earlier in the year.  Our next stop took us to Cliff House where I added a Western Grebe.  I wanted to find a Tricolored Blackbird, so Eddie drove us to Lake Merced, where we found one amongst the dozens of Red-winged Blackbirds, and I was able to get a nice photo.  We finished at Edgewood Park with an lots of Oak Titmouse.  Titmice?  Titmouses?

The next evening I went to the Hayward Regional Shoreline, where in the fall thousands of shorebirds show up and this past week a Red-necked Stint was on show.  I went on the off chance it would still be there, as it hadn't been reported in a couple of days, and I found even more birders looking for it than the 20 or so American Avocets that were also there.  Along the way I counted a Black-necked Stilt and Long-billed Curlew for the year list, but when I left just before dusk, no stint had been seen.

The next day I flew to Phoenix, Arizona and drove down to Sierra Vista, where the next morning I met Matt Brown for a full day of birding around Cochise County.  We started at Pinery Canyon, which  is up a winding canyon road with not so many severe dropoffs, where there were I was able to add 11 Year birds, including Red-faced and Grace's Warbler, a Dusky-capped Flycatcher and a Magnificent Hummingbird that litterally looked me in the eye.  If you've seen the movie The Big Year, there is a scene that looks too good to be true when a Xantu's Hummingbird hovers about 2 feet in front of Steve Martin's nose.  I can tell you now that I have now had a hummingbird hover 2 feet in front of my nose.  So there!

We next took a drive out to Ramsey Canyon where the hope was to see one or both of a Flame-colored Tanager and Tufted Flycatcher.  But to get to them, a two mile hike was required.  Sounds easy enough, and the first quarter mile seems easy enough.  It's the next half mile that really does you in.  It's not that far in terms of linear distance but it rises 1000 feet above sea level over that half mile and you're already at altitude.  And it was hot, and forget about what they say about dry heat, it was humid too.  I had to stop every couple of hundred yards to catch my breath.  Still we made it to the peak in just over an hour and when I got to the top and saw the few I was embarrassed about how much I complained that I wasn't going to make it and was on the verge of death.

We spent an hour or so in vain down in the valley looking for the flycatcher but did hear Spotted Owl, saw and heard lots of Sulphur-bellied Flycatchers and were heading back down by 4:15 to try to get to the parking lot before 5pm so that we didn't get locked in when they closed the gate, as we wanted to get to Ash Canyon Bed and Breakfast by dusk for the Lucifer Hummingbird.  Just be we headed down from the peak, Matt's phone rang and he took the call.  Since it was gettting late I continued on down, so I could at least get to the car on time.  But as I went, it seemed Matt was taking a long time on that call.  I began to wonder so, I turned back, but Matt was right behind me saying, breathklessly, "I just got the best view of the Flame-colored Tanager.  I thought he was joking,  but no, he really had.  So he took the car keys and headed down the mountain as I turned back.  It was just as hard going back up as the first time, except I was already exhausted.  But I wasn't going to let the fear of a heart attack in the mountains stop me from getting that bird.

As I closed in on the overlook, I heard a bird.  I listed to the Flame-colored Tanager call on phone and knew I was hearing it.  I found it atop a tree just as it flew off.  I found it again and got my photos.  New year bird and ABA Lifer 649!

We finished the day at Mary-joe's Ash Canyon Bed and Breakfast where we pulled up chairs with about 20 other birders and within 10 minutes got great looks at the Lucifer Hummingbird, along with 3 other year birds for my list.  On my way back to Phoenix I was able to add 3 more including a Swanson's Hawk.  As Matt was driving us to Ramsey Canyon I was taking a nap and missed a couple the previous day.

And no trip to Phoenix is complete without a visit to Encanto Park, where the Rosy-faced Lovebirds hang out.  On my last morning in Arizona I took an Uber to the park and it didn't take long to spot these cute little love birds.  I spent a hate Yearlf hour enjoying them along with adding a Gila Woodpecker to the Year List to give me 365 species in the first six and a half months of the year, only birding where I travel with the Blue Jays.

Calliope Hummingbird, the little one in front: 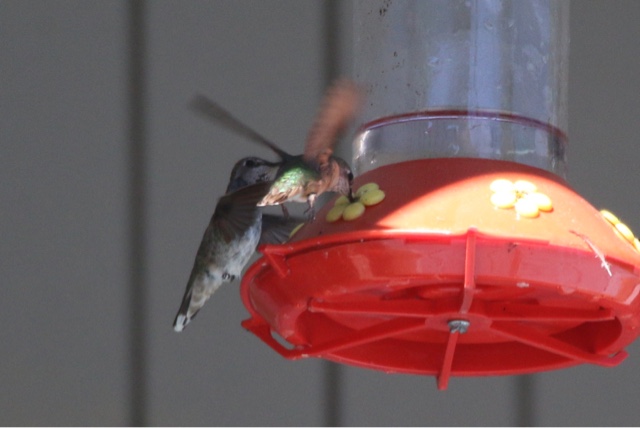 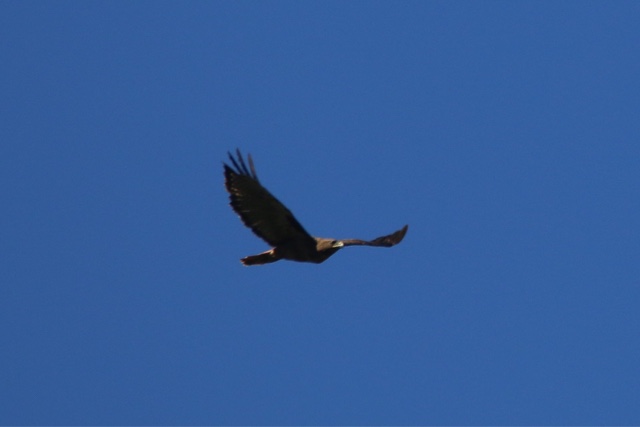 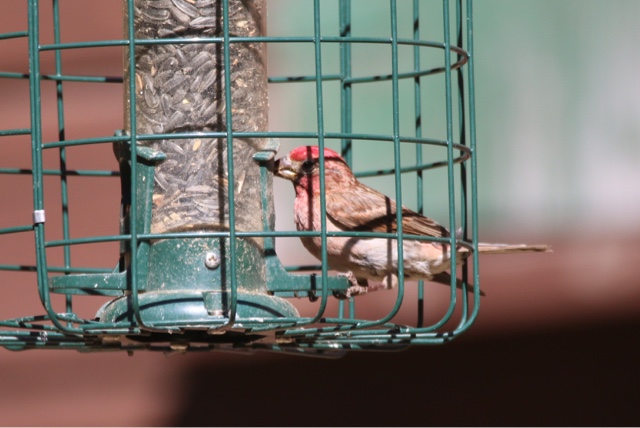 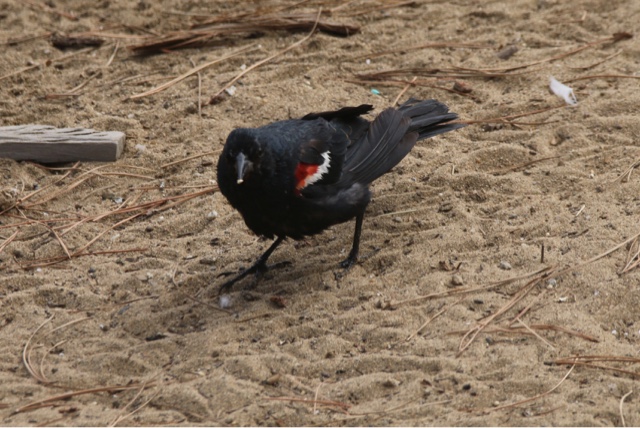 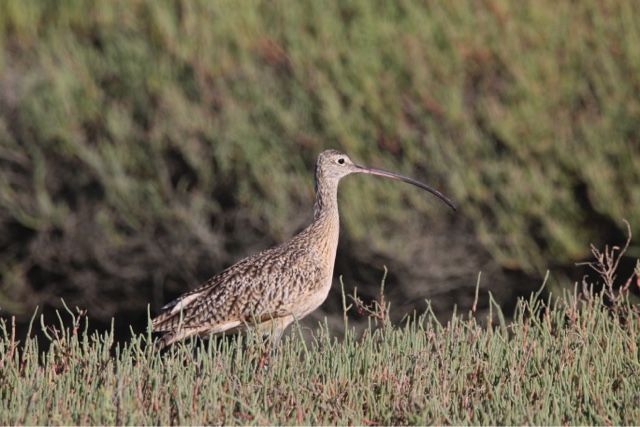 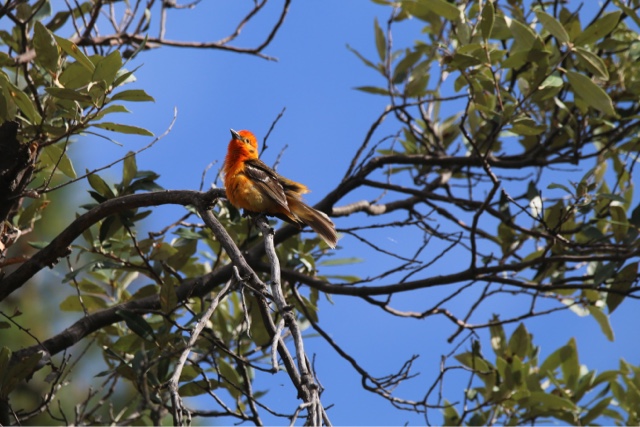 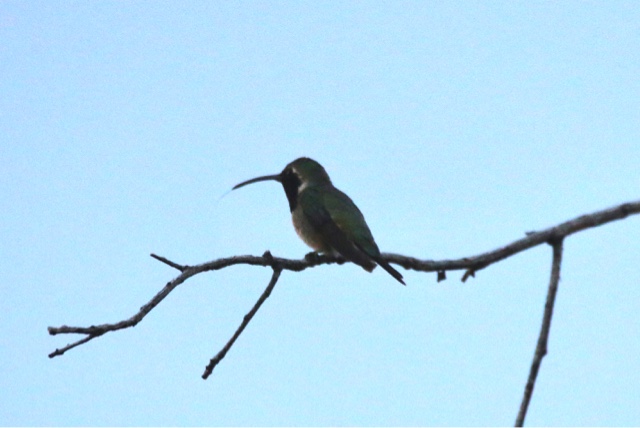 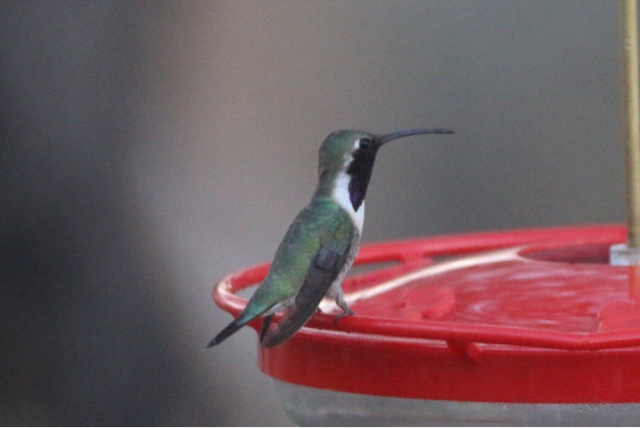 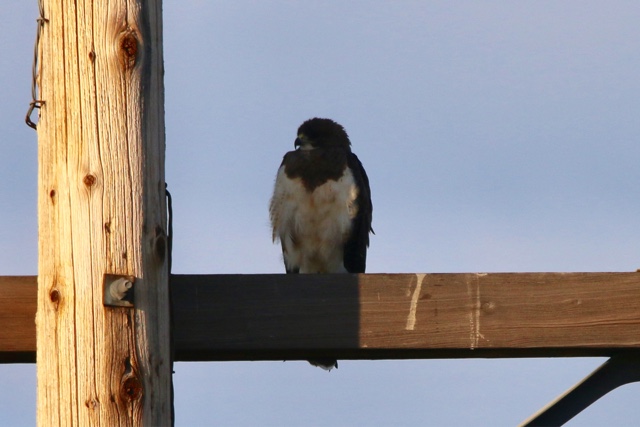 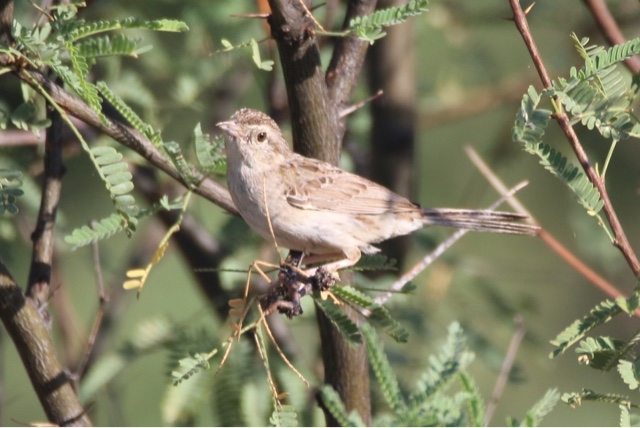 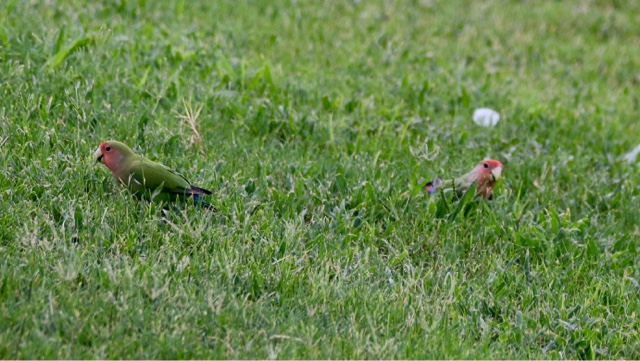 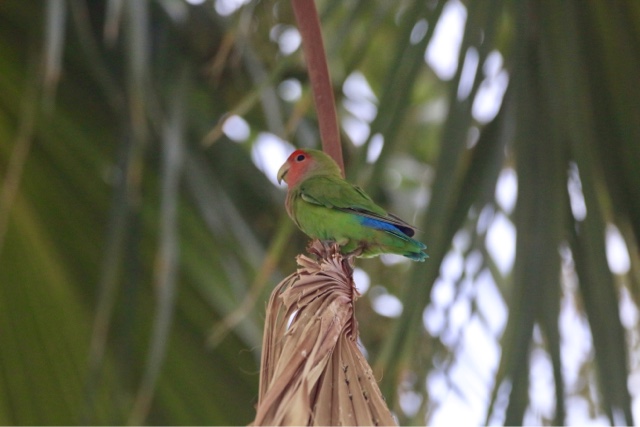