A Connecticut Warbler in a Pilgram's Court

While staying in Manhattan, Central Park is my best bet for birding.  It was nice in the spring, way too hot and humid in August, but September brings cool breezes and fall warblers.  It was with this in mind that I set out this morning looking for what the wind might have blown in.  In particular, I hoped for a best case scenario of a Connecticut Warbler, as my previous two sightings were in the fall, the first one being in Cape May, NJ during my first Big Year nearly 4 years ago to the day, on Sept 8, 2012 at Higbee Beach.

I started off early Tuesday morning, checking out Strawberry Fields, before heading to the Ramble.  Mostly it was Common Yellowthroats and American Redstarts, but I eventually encountered a group that was looking at a female Hooded Warbler.  I spent some time with them and after moving on ran into a young birder who I've seen a couple of previous times in the park and we exchange sightings.  I told him about the female Hooded Warbler and he told me about the Connecticut Warbler he had seen on his way into the park at Pilgrim Hill.  He gave me directions and I headed over there.

Two other birders were already looking for the bird in the bushes below the Pilgrim statue.  The Connecticut Warbler is normally a pretty skulky bird and in this regard it did not disappoint. However, it was occasionally, not just flying above the bushes, but alighting upon some bare branches of nearby trees at eye level.  This gave the three of us a few good opportunities to see and identify it.  However a photo was a bit harder to come by.

Eventually, at least a dozen other birders from around the park, most of them with one guided bird group, showed up and we all surrounded the bushes and as the bird moved around, most got to see it.  It took a while, but at one point the Connecticut, along with a Common Yellowthroat, came out into the open and took turns landing on the same branch.  I snapped lots of photos and did get a good shot of the target bird. 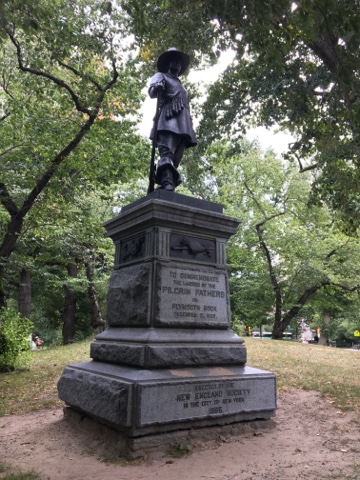 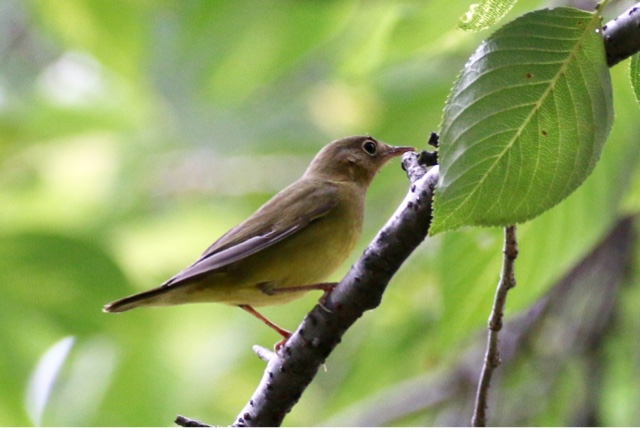