Birding By GPS: The Good, the Bad and the, sadly, Ugly

Baltimore, Day One: The Bad and the Ugly

There are not many birds viewable right now in the Baltimore area that I have yet to see this year.  As much as I love birding, I love finding new birds better.  So I'm only going for birds new to the year list and at this point. eBird is my best bet for choosing and finding those missing species.  At times eBird has taken me to amazing locations I'd have never just found on my own, and at other times it has taken me places I'd rather have not found.

In the case of my search for a Buff-breasted Sandpiper in the Baltimore area, I chose the closest spot to my starting point in downtown Baltimore, a place called Swan Creek Wetlands.  Seemed easy enough.  GPS directed me to a road that looked promising until I got to signs that said do not enter on penalty of prosecution, etc.  I looked at the map and decided that maybe I was meant to enter on the other side of the "wetland."  There was a road.  There was a little parking area.  There was a "trailhead" strewn with garbage leading into tall grass about a mile from the "wetlands."  I passed.  Only to find out the next day that had I driven into the "Do Not Enter" area I'd have been able go into a building and sign a waver allowing me to view the shorebirds of the Swan Creek Wetlands.  More on that later.

So I had to come up with an alternate plan and had very little time left in my morning bird outing to find somewhere.  I settled on Fort Armistead Park, as it was close by, and found a few fishing piers, also strewn with garbage that, sadly, was likely mostly left by the folks who fish there.  There was also a path through the woods that lead to the roof of some odd abandoned buildings covered in graffiti and I had to beat a hasty retreat, having only seen a Spotted Sandpiper in my morning shorebird quest.  The rest of the morning was no more productive and it was one of the less satisfying days of birding I've had this year.

So on my second day in Baltimore I was determined to find somewhere to see the "buffy," as one birder I ran into called it.  This time I headed for the nearest sighting close to any sod farm.  Back home in Ontario sod farms are always the goto place in the fall for them.  Here in Maryland the Central Sod Farms on John Brown Rd seemed to be the place to go.  And hard to get lost with GPS directions to a sod farm on a road.

I arrived in good time, had great views of the many sod farms in the distance and as I was setting up my scope for a first glance, with my new MeFoto tripod, a driver pulled over and said, in a charming Australian accent, that he had seen two "buffies" just up the road past the next house,.  I headed up that way and started scanning, but was only seeing Horned Larks and Killdeer.  Another driver, a guy named Joe, pulled up and started looking with me.  We found an Upland Sandpiper, but any other birds that seemed to be Buff-breasted kept landing behind a ridge way off in the distance.  Joe offered to head a bit further on and check another field while I kept looking and he returned shortly with news of a Buff-breasted just up the road.  I followed him and within minutes we were both scoping a lovely Buff-brested Sandpiper, saving me a trip back to Swan Creek, to which, Joe explained how to gain entrance.

Moral of the story is, I guess, just keep the adventure going.  Sure, sometimes eBird and the GPS devices will send you off to places you can never "unsee," but for the most part, to paraphrase Douglas Adams from Dirk Gently's Holistic Detective Agency, you don't always get where you were going, but often end up where you need to be.  Words I have lived by since I read that book oh so long ago, and which very much apply to most of the birding adventures I've had over the past the 5 years. 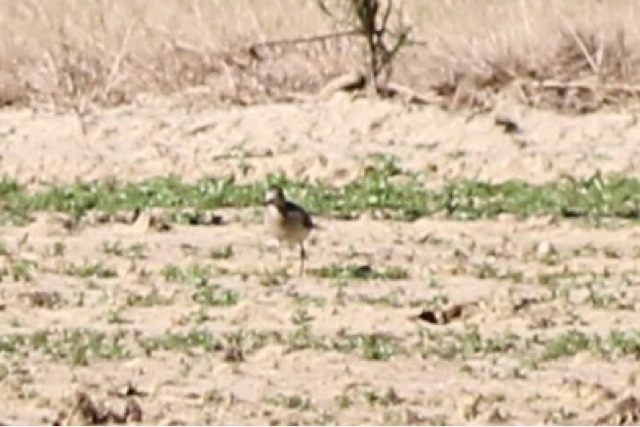 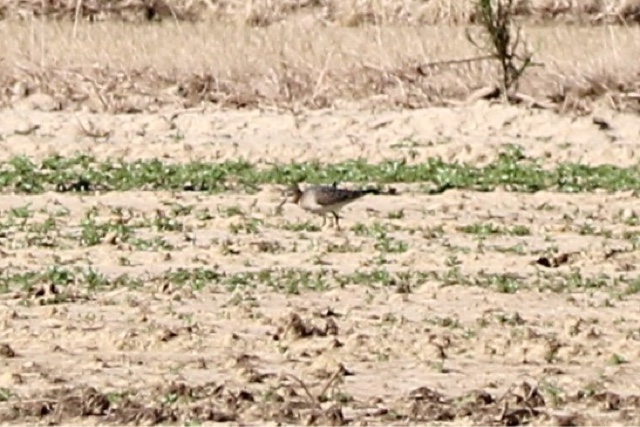