It is rare when chasing rarities that the chase will result in a quick find and an easy picture.  Really, if that were always the case, chasing rare birds would wouldn't be as fun or satisfying.  Such was the case in Long Key State Park, last night and this morning.  Of course, plans never seem to go as planned and the thought that I would get down to Long Pine SP in the Florida Keys with plenty of daylight left and get to stay in the lodging of my choice, after quickly finding the Zenaida Dove, was just Key Lime Pie in the Sky optimism.
It did seem, at 5:55 that there was a lot of light left in the day, but the folks at the entrance gate at the state park, were closing up shop for the day at 6:15 and that meant if I paid $4.50 to get in and didn't get to the gate by 6:15 I could be locked in for the night.  Of course, if you know me, you know that I am no stranger to sleeping in my car, whether on the side of the road or in a camp ground.  Also the bugs were really biting and I did not have the required repellent.  So I called up Parmer's Resort, down near Marathon to get a room in one of their lovely cottages and eat at the local watering hole with the 15% discount and was told the only room they had available was north of $500 for the night.  Woe is me, right?  I instead chose a regular hotel about 30 minutes north of the state park and along the way ate dinner at a lovely establishment, called oo-tray: 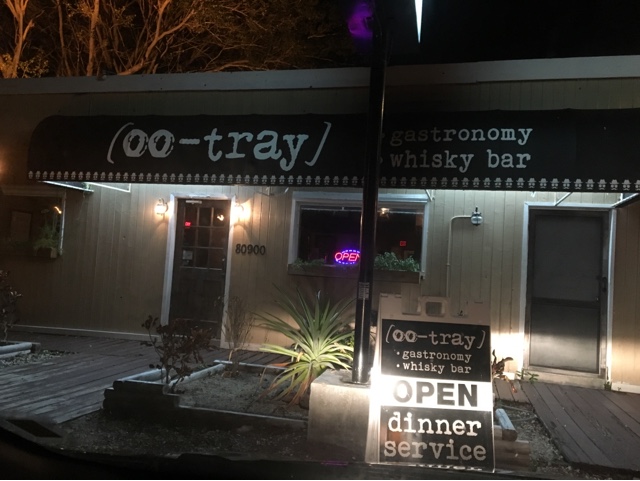 Though I did not imbibe the whisky, the gastronomy was first class, served Tapas style and the dessert was made from scratch after I ordered it.  I shall be returning to the keys and oo-tray again sometime.
After a good night's sleep I headed back to Long Pine, arriving 10 minutes prior to their 8am opening, only to find five cars already ahead of me, each and every one full of birders anxious not to miss the Zenaida Dove, a bird that has only been seen nine times in the ABA area, and only twice since 2002.  Though widespread as our pigeons in the Caribbean, it is rated as a Code 5 here in North America, thus the onslaught of birders from wide and far coming to the park over the past 6 days.
By 8:10 about 6 of us were out on the Golden Orb Nature Trail,(there was neither gold nor orbs to be seen anywhere), searching the ground, bushes and trees for a bird that was sure to be a Lifer for most present.  We were also on the lookout for Key West Quail-dove, but by 9:30 all most of us had were 2 Gray Catbirds.  As the morning wore on, more birders appeared, including Larry Manfredi, who in 2012  was of great help finding the Fork-tailed Flycatcer and letting me sit in his backyard to see Shiny Cowbirds after I failed to see them down at Flamingo in Everglads NP.  He also threw in a Gray Kingbird for good measure.
Along for the search was Big Big Year Birder Jay Lehman, who in 2013,(obviously inspired by my 2012 Big Year), joined the 700 club and took 4th Place in the over all Big Year Standings with 734 species.  However, he had not seen a Zenaida Dove, so this was a big deal for him too.  We all split up and some of us exchanged phone numbers and continued to look.  As it was getting close to 10am I needed to use the restroom and get a drink of water from the fountain, so headed back to the trailhead, hoping that nature's call didn't result in a missed bird.
As I headed back to the search area, I spotted a dove on the ground, and two birders taking a close look at it.  I came to a complete stop, held my breath and looked as well. 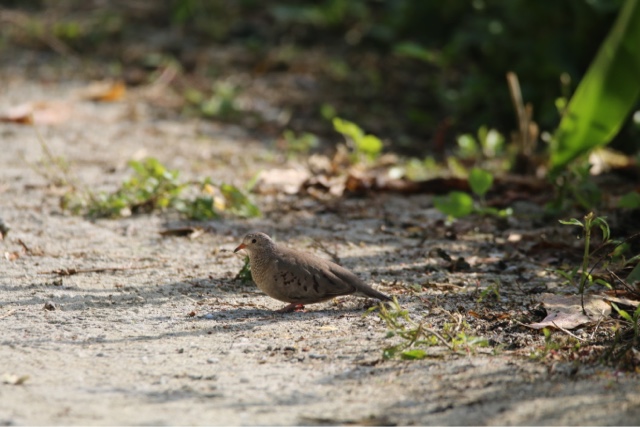 It was a Comon Ground-dove.  Rats.  Still it was a good sign.  Took over an hour to find this one, so maybe dove Karma was on our side.  You know, Zen and the Art of Birding to get a Zenaida Dove?  Well, maybe not.  I met up with Larry again and together we decided to walk the entire loop, and maybe get two doves for the price of one.  He did point out many places he had in the past seen Key West Quail-doves, but none were cooperating today.  We walked the entire loop, came back to the boardwalk, grabbed a quick and refreshing drink of water and headed back to the trail.
As we were about to walk past a couple of hikers, there was a dove on the ground.  But this was no ground dove.  Larry asked the two hikers to stop and explained that there was a very rare bird on the ground in front of them.  They stopped, we all looked.  The white tips on the ends of the wings differentiated it from the more common Mourning Dove.  We had our Code 5 and may have missed it had we not walked the entire loop.  However by the time I could try to take a photo, the bird was back in the tangles off the path.  I texted one of the couples I met earlier that morning and Larry called someone and within five minutes 20 people had converged on the area and within minutes it had been spotted again.  Too far for a photo, but with all those eyes spread along a small section of path it wasn't long before it showed again.  This time peaking its head above a log. 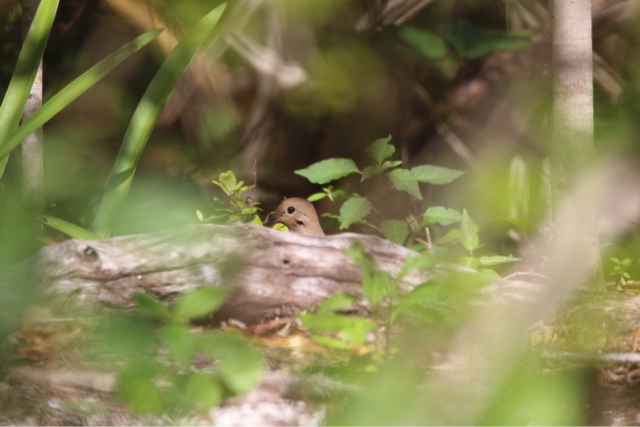 Okay, that was a start.  Over the course of the next twenty minutes or so it became more and more cooperative. 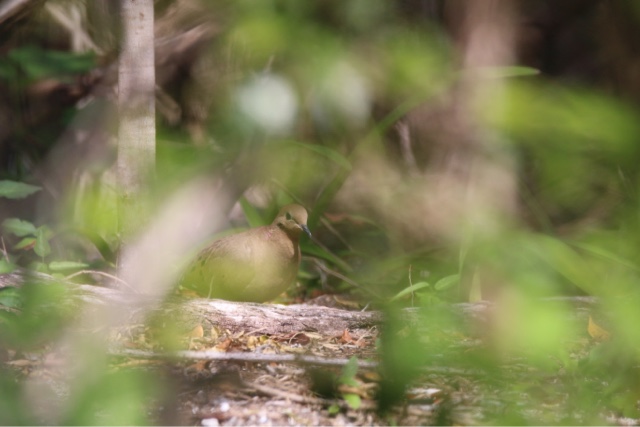 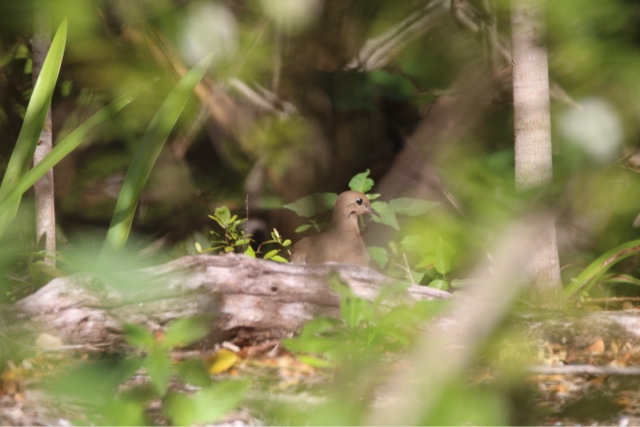 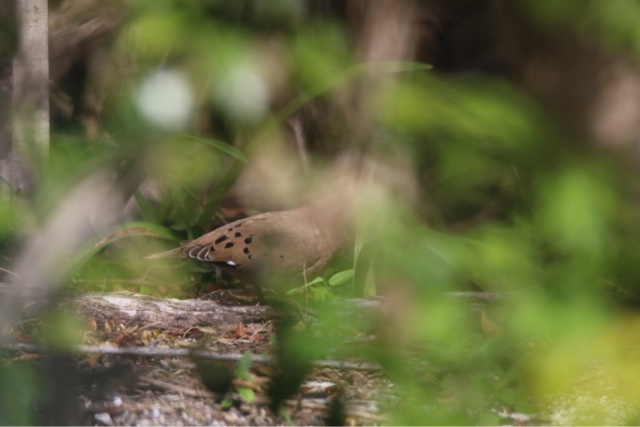 Oops!  Too much, but this time we could see the little white patch on the wings.
And then, finally... 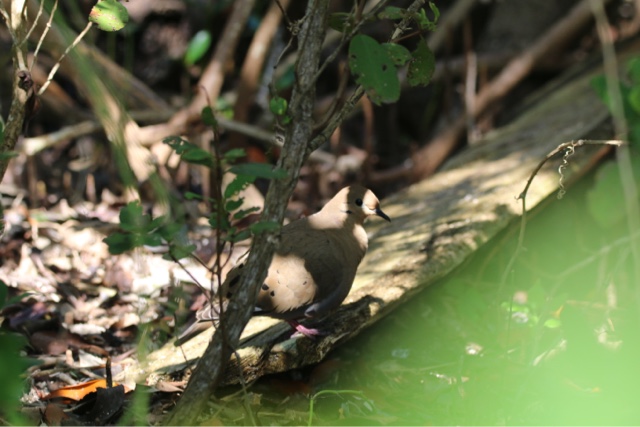 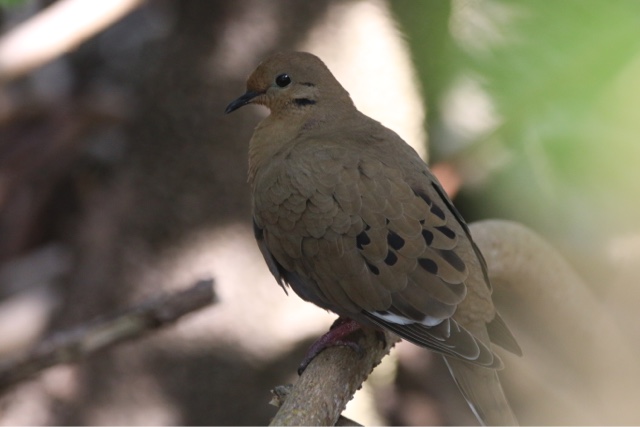 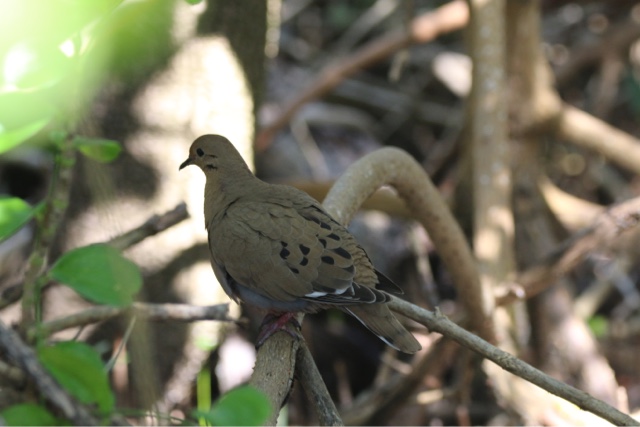 Jay, who I accidentally called John, got his photos, as did Larry and most of the others present.
Not sure what number it was for some of the others present, but for me, in the ABA Area, it was 644 and my 4th Code 5, to go along with the Nutting's Flycatcher, Sinaola Wren and Whiskered Tern.  A great morning for all present.  There were other birds around as well, and will share photos in the next installment.
Posted by Robert B at 8:16 PM