This week in Big Year Birding:

In March of 2012 I had reserved what turned out to be the "Vomit Cruise" to The Dry Tortugas, as it is yet another station of the cross on any Big Year Quest.  It was a 36 hour there and back trip from Dunedin where I slept in my car, saw amazing birds in Key West and Beyond, and tossed more than my cookies off the back of The Yankee Freedom.  Two years ago I took the plane, but felt I was cheated on time on the island, so last year, pre-drugged by a Scopolamine Patch placed on my neck the evening before, I once again boarded The Yankee Freedom and made it all the way and back without contributing to the sea.

This year, as I do my Birds and Blue Jays Big Year, I had intended to go again.  Ah, but alas the job dictates where and when I can travel.  I tried to book too late, and will have to put off that trip for another time.  However a Black-faced Grassquit was being seen down in Long Key State Park again, where I had recently seen the Zenaida Dove.  At least that trip I figured I could make.

But before I could head south, I headed north, back to Hernando County, one time home of one of the last and dwindling populations of wild Budgerigars.  Birders for years have been cruising Gulf View Drive in Hernado Beach checking the wires and occasional feeders for these lovely wild cousins of the budgies many of us had as our first pets, growing up.  The remaining population of these birds in Florida was given an extended run, due to the kindness of one homeowner who had feeders in her back yard, where many of the birds enjoyed a meal or two every day.  Sadly, when she sold the house, the new owners didn't keep the feeders up and by the end of 2013 the Budgeriegars were rarely seen.

I knew it was a long shot to see them in the spring of 2016, but I went for the nestalga.  The memories of driving the neighborhood the first time, finding my first Brown Thrasher, but not the birds I came for and being stopped by a Neighborhood Watch person, checking to make sure I was not a pervert with my binoculars and camera.  I returned a few days later and did get to see the Budgerigars. This year's trip around the neighborhood resulted in friendly waves from homeowners and my first of year Eastern Bluebirds.

Next I was off to Weekiwachee Preserve, where 4 years ago I flushed a Le Contes Sparrow late in the evening,(and liked it), and had heard an Eastern Whip-poor-will at dusk.  This year I enjoyed the sight of a Sandhill Crane touching down almost next to me in the same field I had found the Le Conte's.  I liked that too.

Which brings us back to last Monday.  Not having a ticket to the Tortugas didn't keep me from driving down to the Everglades late Sunday evening in order to get to Long Key State Park early enough  to have a good chance at the Black-faced Grassquit.  Of course, so as to keep up with tradition, I slept in my car at a rest stop in Alagator Alley, and awoke with a start at 7:10 am an hour after I had set my alarm.  I had wanted to be there for 8am opening, but ended up arriving at 9:30, plenty early for the bird I was looking for.  As were a half dozen other birders including Olaf, another birder doing a Big Year.  He has the luxury of plenty of time and money to do the kind of Big Year I can only dream of at this time in my life.

We all walked the camp road between sites 11 and 34 for nearly two hours.  Nothing, not even a whiff of Grassquit.  But no one had anywhere else to be and you don't give up on such a rare bird during a Big or any other kind of year, without a fight.  So we searched and chatted and searched and waited.  We split up, so as to cover more ground.  I really wanted to be the person who spotted the bird.  More often than not, someone else spots the bird and puts me on to it.  Not this time, baby!  About half an hour earlier I was sure I had seen a bird that could have been the Grassquit, sitting on a bucket in a camp site and then flitting into the bushes.  So I concentrated my time in that area, and nearly an hour later, walking into an empty site, and peering round the back, I saw the little olive green bird with a dark face, sitting on the sand.  I got a great look and 100% ID,(I had seen one the previous year in a Bahia Honda SP), noted the location and darted back to the road to alert all the other restless birders.

When we all got back to the spot the Grassquit surprised us all and hopped up on a fence rail not 10 feet in front of us.  I got my camera up but my 150-600 50lb zoom lens was too big for the job.  However everyone got a great look at the bird before it flew into the bushes in the next camp site.  That site's owner let us keep looking for the bird, but it flew past us and by the time I left a half hour later, it had not been reforund.  I ended the day at Loxahatchee, where once again I missed what should have been an easy look at a Smooth-billed Ani.  But I did see a Bobcat for the third time in two years, and the second time in a row, while looking, unsuccessfully for a Smooth-billed Ani.

Still, it was a great chase and a great day all around.  Always nice to meet a fellow Big Year Birder.  Of course I am getting late start to this 2016 Big Year as almost all my travel outside Ontario and Florida won't begin in earnest until April, but from then on it will be either birds or Blue Jays non stop until, hopefully the end of October, and beyond. 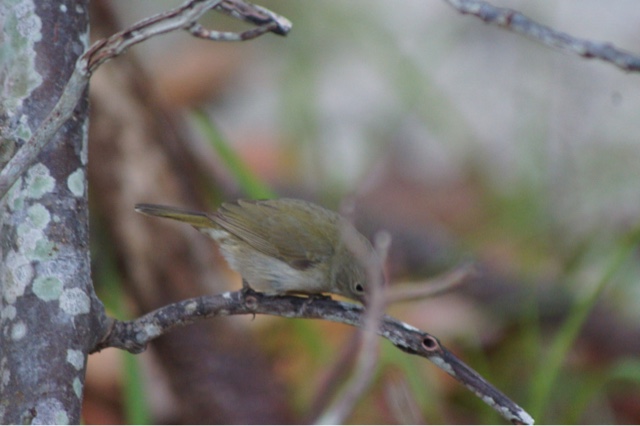 Sandhill Crane in the very field I chased a Le Conte's Sparrow 4 years ago: 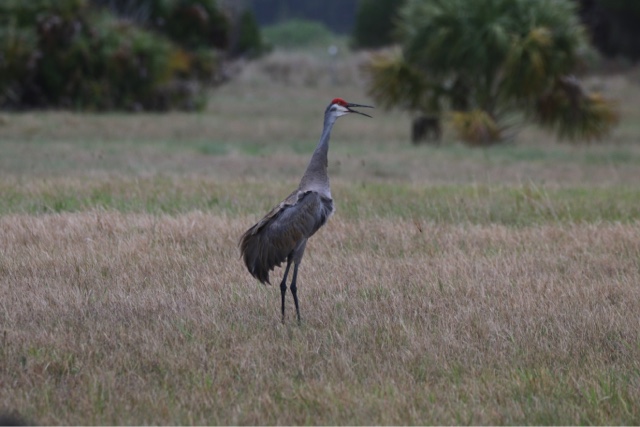 I'd love to know if this is a courtship rite, or an argument over who gets to stand on the rock: 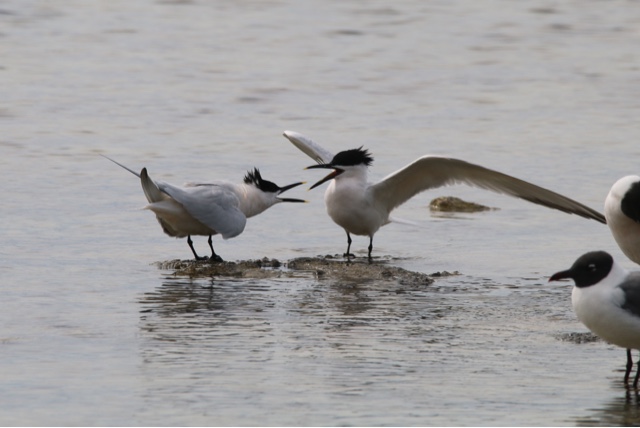 I do believe these Logerhead Shrike were courting.  Nice consolation prize to the Red-whiskered Bulbuls I was cruising the Kendelwood neighborhood for in Miami: 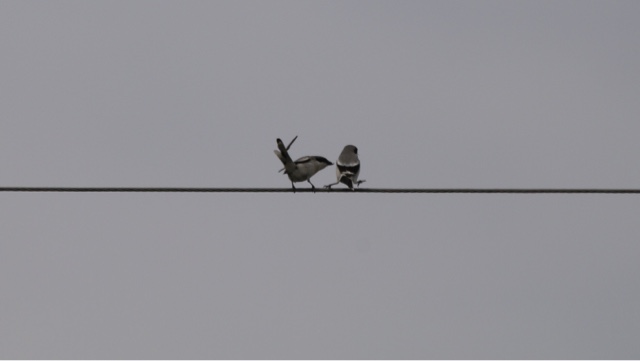 Muscovy Duck in the ponds at the Baptist Hospital in Miami, one of the best bets for this species outside Texas: 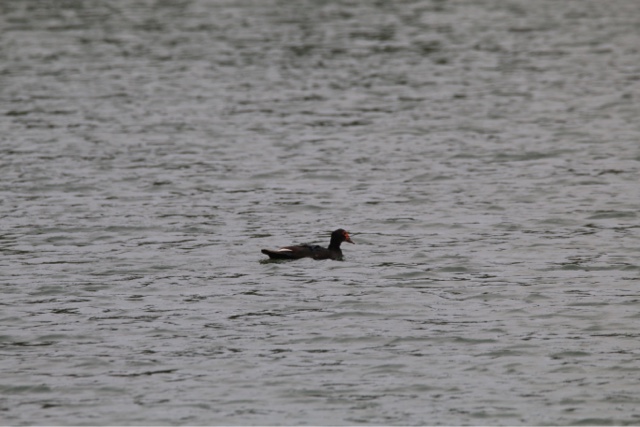 Nanday Parakeet on the power lines around the corner from Loxahatchee.  I almost always see one or more here: 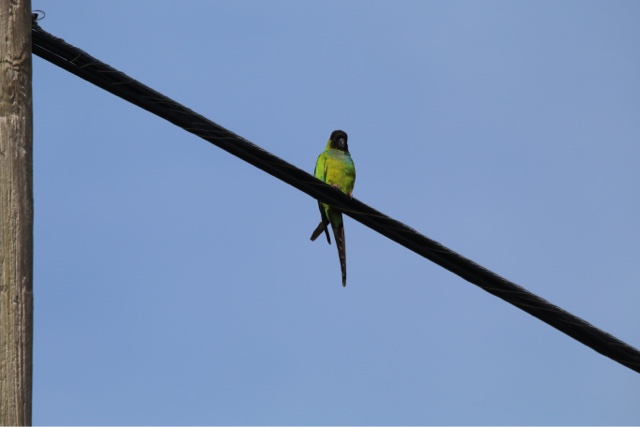 The Florida Bobcat, my consolation prize for finishing in last place in my south Florida chase for a Smooth-billed Ani: 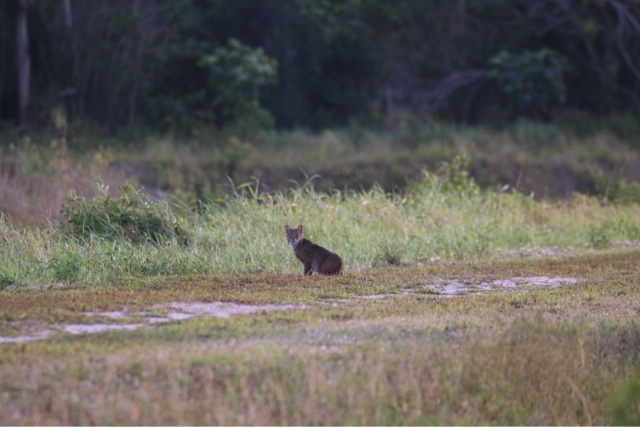 At dusk, as I saw this big bird fly in, I could only hope it was the Ani.  Still, always nice to see a Piliated Woodpecker: 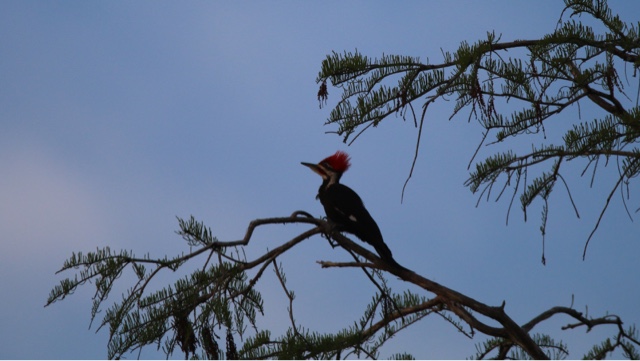