I've been a birder now for nearly five and a half years.  Yet I had never birded in Central Park.  I had been in Central Park at least a dozen times prior to becoming a birder and very likely noticed no more than pigeons and ducks.  But I've long since known that the park is a birders haven, especially during spring migration.  Unfortunately, as the late great Toronto Blue Jays radio voice, Tom Cheek, was often fond of saying, I was a day late and a dollar short, for this year's migration.  A week earlier, and well, I don't even want to think about it.

Still, there were birds and there were birders and I visited parts of the park I had never been to, including Strawberry Fields and The Ramble, both great places for spring warblers and a variety of other spieces that live in or pass through Central Park in May.

I began on Monday morning, a rare day off from baseball and was able to spend the whole day in the park.  I would later discover there had been a Curlew Sandpiper seen 3 hours away in New Jersey, but two things worked against me there.  First, had I found out about it early enough in the day, I'd have had to get a Zip car and drive both out of and back into midtown Manhattan.  Secondly, my rules state I can only count birds in states where the Blue Jays play baseball, during the baseball season.

Central Park is BIG!  Manhattan is bigger and navigating the streets to get to the park is an adventure.  There seems to be a symbiotic relationship between the cars and pedestrians.  It's like a game where the drivers try to run up as close as possible to other cars and pedestrians without hitting them, and pedestrians attempt to navigate the streets getting as close to being hit as possible, without actually being hit by the myriad cars and trucks that continually blast their horns and ignore red lights.

But once you do get within the park boundaries, there are a couple of places that, when you have limited time, you need to find.  First, Strawberry Fields, where I discovered on my last day that wild strawberries are actually growing, and The Ramble.  Just a small piece of advice, when asking a park employing for directions.  Don't ask, "Can you direct me to the rambling."  Almost as bad as pronouncing "Flor-e-da Canyon" as in the state of Florida.  I've done both.

It took a whole day, but I did see a few good warblers, and added a Gray-cheeked Thrush to my Year List.  But I had to call it a day early, by around 4pm, as I had developed several blisters on my toes, and it was affecting my walking and my right knee was in severe pain.  It was a long walk back to the hotel, with a stop at the 5th Avenue Apple Store.  It was extremely crowded with a 5-1 ratio of customers to staff.  It was a happening place.  Which was in stark contrast to the Microsoft store further up 5th Avenue.  I think there were about 15-20 staff and maybe 5 customers.

The next few days I had limited time in the morning and had to walk with my blistered toes wrapped in cotton balls and band aids, while my right knee ached.  Wednesday morning I did something that made me forget all about the pains in my feet and right knee.  I got caught behind a long stretch of park benches.  I either had to walk all the way around them, or just step over.  How hard could that be?  Well the sides of the benches are made of cement and about 6 inches higher than the horizontal wood slats that make up the back of the bench.  My left knee slammed hard into the cement, making me think I broke it and was going to have to pay $3.99 a minute to have a rickshaw driver run my back to the hotel or emergency.  I sat on the ground for a bit, tried not to throw up, drank some water and after about 10 minutes decided to just walk it off.  It's still sore 3 days later, and causing me pain in the rest of my left leg.

Wednesday was the return of the warblers to Central Park. From Strawberry Field to the Ramble there were birds everywhere.  I was about half an hour late for a Mourning Warbler, but there were plenty of Canada, Magnolia, Redstarts, Catbirds that made strange kiss-y sounds I've never heard before.  There were Parulas, Blackburnians, Blackpolls and Wilson's, along with lots of Red-eyed Vireos, and to top it all off, new bird for the year, an Olive-sided Flycatcher high atop a dead tree in the Ramble.

I finished off at Strawberry Field trying again for the Mourning Warbler, but did add Cedar Waxwings and a teasing Ovenbird to the day list, before heading to Yankee Stadium where the only birds I could list were a flock of Rock Pigeons hanging out at second base.

My final morning saw me limping back to Strawberry Field a little earlier than the previous day, hoping to be early enough for the Mourning Warbler, and I was rewarded with a 5-10 second look at the Mourning Warbler skulking in a bush before it flew off into the woods, not to be seen again that morning.  Another one, maybe two, were seen down by the Oak Bridge leading into The Ramble.  I along with a dozen other birders, who seemed to materialize out of nowhere, all gathered hoping to find the other Mourning Warbler, but with no luck by the time I had to head out.  I made one more pass though Strawberry Field where I added one more new bird for the year, a Tennassee Warbler high in a tree, flitting around with a bunch of Red-eyed Vireos.

All in all, Central Park was a great place to bird everyday while I was staying in Manhattan.  I met dozens of birders who somehow get to spend their weekday mornings in the park.  A guy named Bob takes groups out every morning as well.  I get to return in August and September, just on time for Fall Migration in the Park. 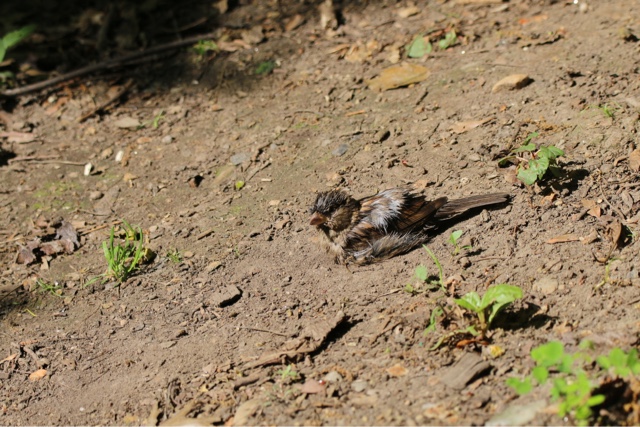 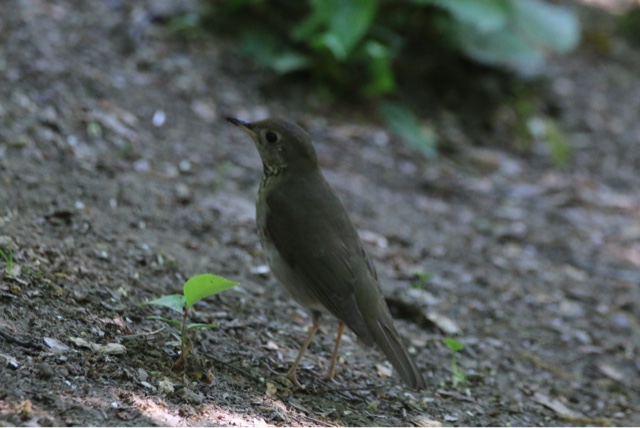 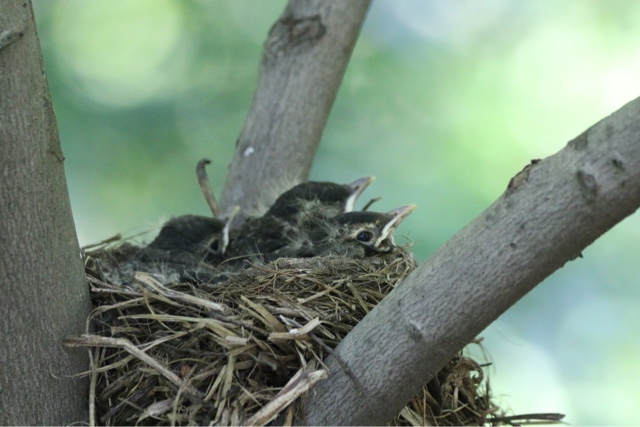 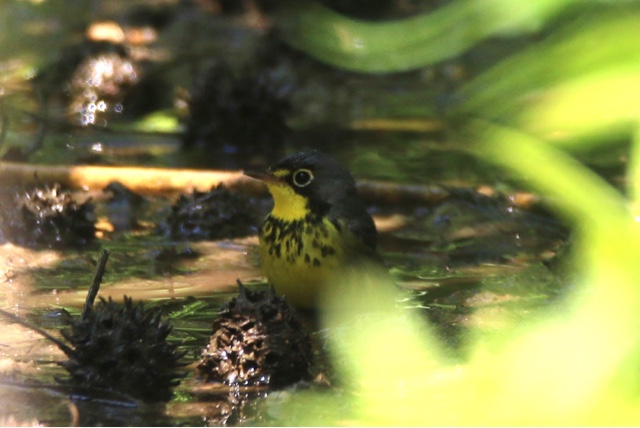 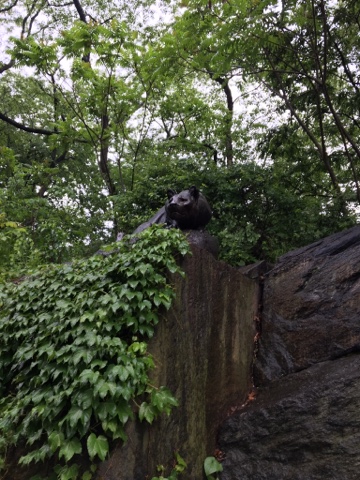 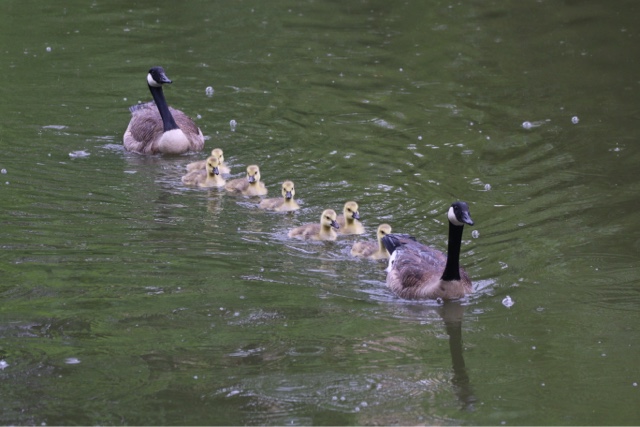 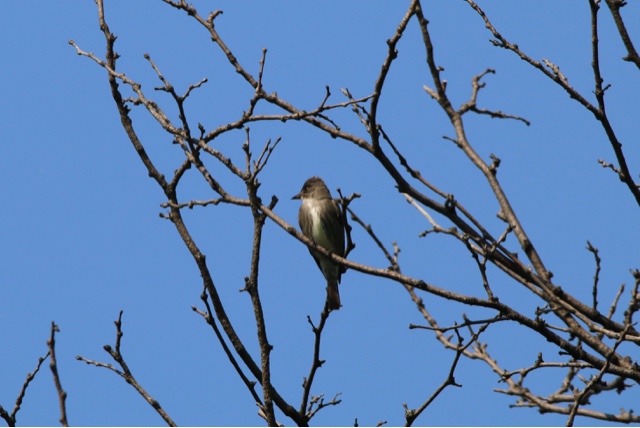 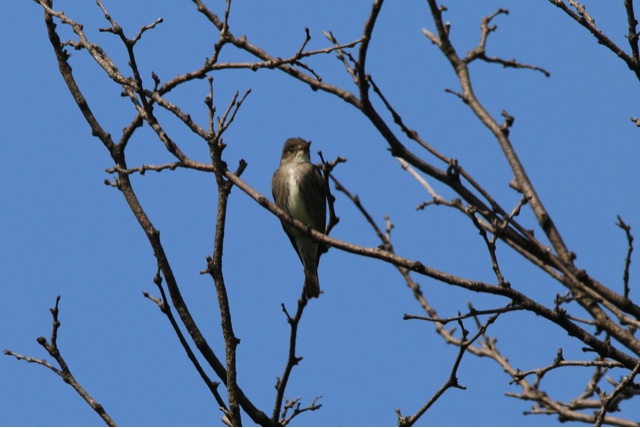 There actually were strawberries growing in Strawberry Field: 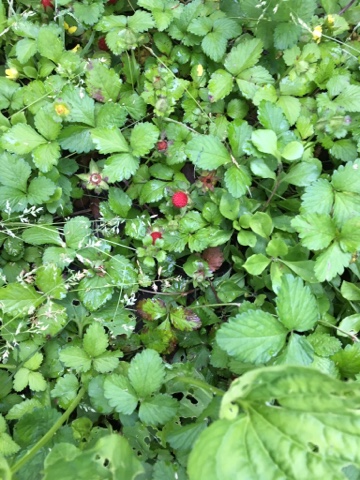 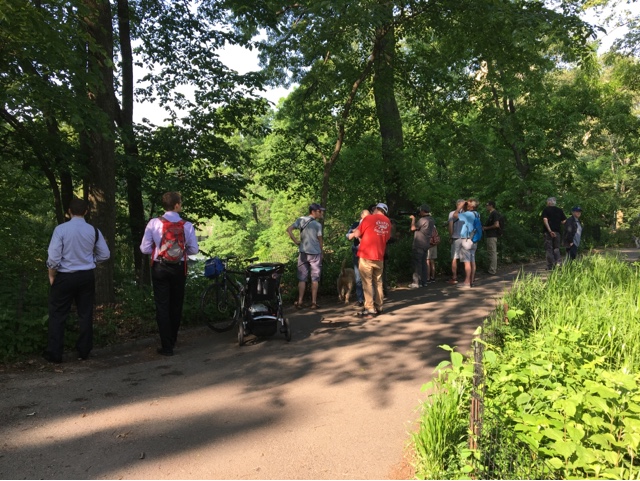