Birding in Boston: 0 vs Detroit: 6

No, that wasn't the score of a baseball game, but the additional bird count for my 2016 MLB Big Year.  This road trip was a 6 day sojourn through Boston and Detroit.  I had hoped I'd have had time to go down to Barnstable, where once upon a Big Year in 2012 I went down searching for a Little Egret, only to get Common Eiders, a Black-headed Gull and find out about a misplaced MacGillivray's Warbler in the Fenway Victory Gardens.  However, this trip in to Boston time was at a premium and I just didn't have the time to spend 3 hours in the car, so I limited my birding to Mt Aubern Cemetery and the Fenway Gardens.

Mt. Auburn Cemetery is a definite Station of the Cross for birders visiting the Boston Area.  It's nearly as big as Central Park, just as many birds yet far fewer people walking around.  And the scenery is beautiful and the monuments quite lovely.  You could spend a few days there and not see it all.  I only had one morning, so I started early.  I had hoped to find reported Purple Finch and Black-billed Cuckoo,(yet again), and found neither.  I did make a nice list of birds for my daily e-Bird list, but it was the peaceful and tranquil environment that made for a lovely morning.  I did run into a couple of birders who directed me to "The Dell," and it was even more tranquil.  All in all, a nice place to be dead or to go birding.  Personally, I'll take the birding, even if I didn't see any new species for the year.

In the Fenway Victory Gardens I enjoyed the newly blooming flowers more than the birds, and it was nice to see the owners of the garden plots working in their gardens and even enjoying a picnic or wine and cheese, as they admired their recent blooms.  I also spent time walking along the Charles River, where the Canada Geese were also in full bloom, so to speak, with many large, new families.

So, after 3 days in Boston I was hoping that the Detroit area would prove a little more fruitful for additional year birds and I was not dissapointed.  Again, I only had 3 mornings to do my birding, so I had to choose wisely as to where to bird.  The Kensington MetroPark in Milford seemed as good a choice as any for its variety of birds,(did I mention I was looking for a Black-billed Cucloo?), so I reserved my Zip Car the night before and was on the road by 6:30 the next morning.  I was able to add Bank Swallow and Acadian Flycatcher to the list, but the flycatcher proved difficult to photograph, as it is a high canopy bird.  I heard it before seeing it and did get looks high in the trees through my binoculars, but it wouldn't sit still long enough for any photos.  I decided to move on, found the Banks Swallows, by the bank of the lake, and they too proved difficult to photograph.  Before I headed back to Detroit and work, I took one more shot at the Acadian photos and after playing a few calls on my iPhone one did come close enough to pose for a somewhat reluctant photograph.

That evening I saw in e-Bird that both a Clay-colored Sparrow and a Yellow-breasted Chat had been reported in a place called Patriot Park in Canton MI.  Reports seemed to indicate they were "continuing" and one birder even cave instructions as to which fire hydrant to look near for each of the birds.  What more could you as for?

Once again, I headed out early to look for Patriot Park.  Not so much a park as a nice patch of land that may have, at one time, been destined to become just another housing development.  Luckily for both the birds and the birders who love them, the town of Canton stepped in and made sure this patch of land would stay natural.  Natural it is, through it might be better renamed Patriot Wildlife Preserve, as it's not much of a park.  There is a gravel path that leads from a gravel road, round a bend to a housing development on the far edge.  Along the way, there are about 8 red fire hydrants.

The sparrow was to be seen between the 4th and 5th hydrant, but I could neither hear or see it, so after a bit I walked to hydrant number six, where the chat had been seen and heard.  I heard the chat calling almost as soon as I approached the hydrant but never really got a good look at it.  Meanwhile, I could hear the Clay-colored Sparrow calling, just beyond the 6th hydrant.  He did come close enough to pose for photos.  I also heard a Ring-necked Pheasant calling along with many Willow Flycatchers.  So in two mornings I was able to add 6 new species to the year list, giving me 305 in the first 5 + months of the year.  Too bad there wasn't time to drive up to Grayling for Kirtland's Warblers.

This morning, I had a 9am bus to work that I had to be on.  That meant I needed to be back at the hotel by 8:30am.  But I really wanted a photo of the Yellow-breasted Chat.  Risk vs Reward.  I would have to get up very early, drive the 45 minutes to Canton.  Have about 30 minutes to find and photopgaphy the reclusive Chat.  I heard him calling almost as soon as I arrived, but with only about 10 minutes to spare before I had to head back to my car, I finally spotted the bright yellow chest about 100 yards away in a bush.  I got my photos, and survived a traffic jam to arrive back just on time to get changed, packed and on the 9am bus.  To top it all off, the Jays won the final game in Detroit, making for a great ending to this road trip.

The Goose Families along the Charles River in Boston: 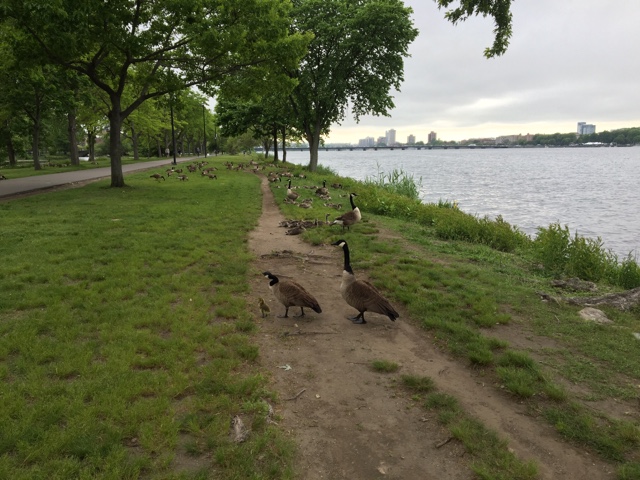 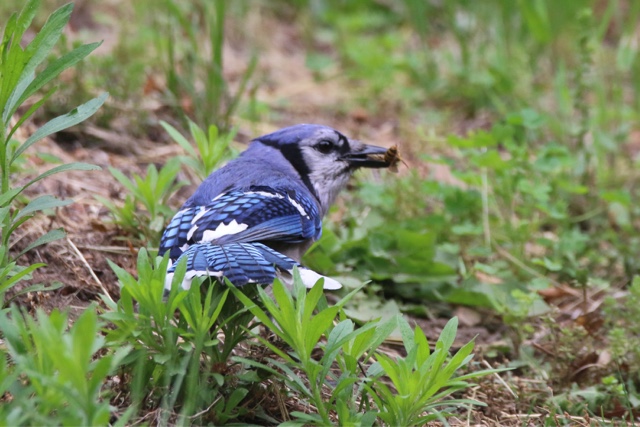 One of the Magnificent Monuments in Mt Auburn Cemetery in Cambridge, just Outside Boston: 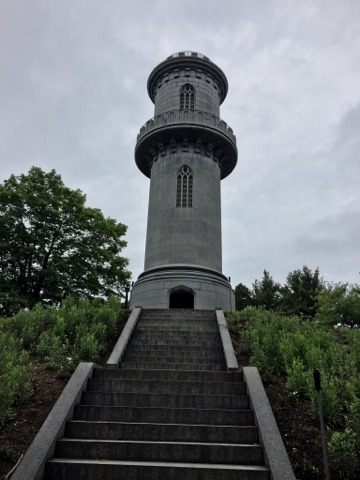 Entrance to "The Dell" in Mt Auburn Cemetery: 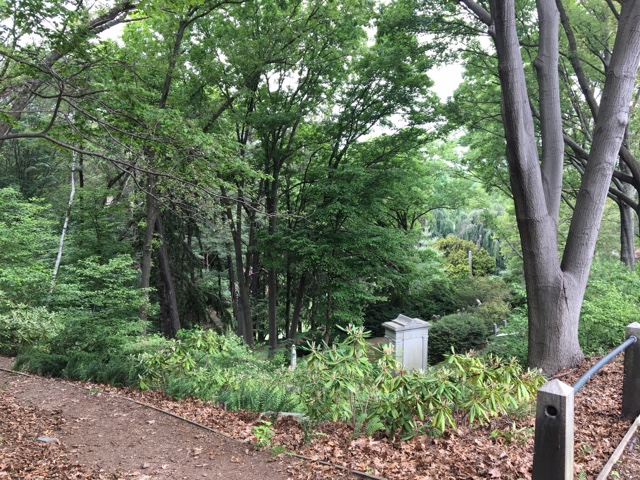 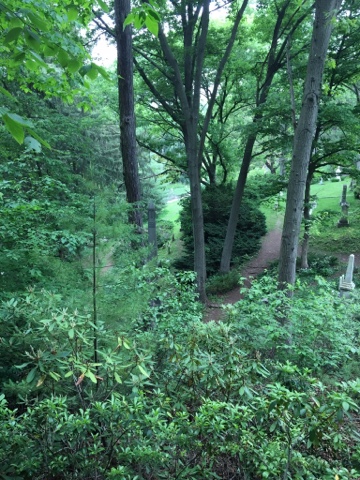 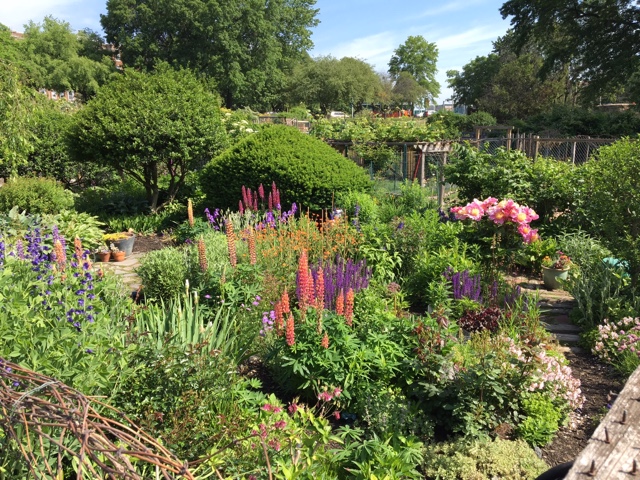 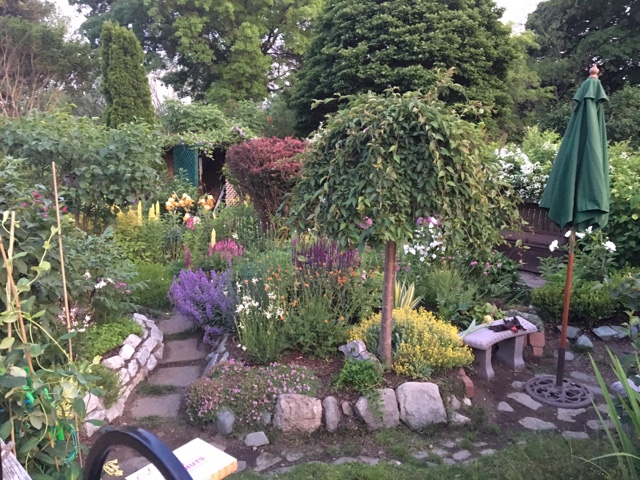 Bank Swallow and Acadian Flycatcher at Kensington MetroPark, outside Detroit: 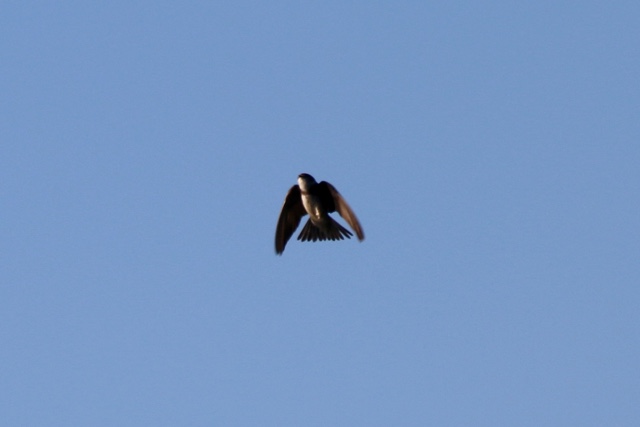 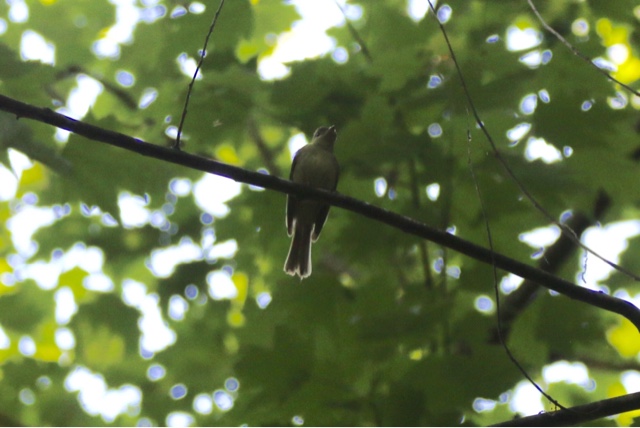 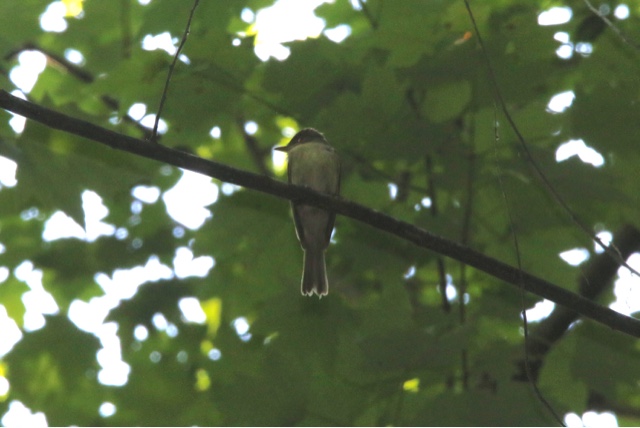 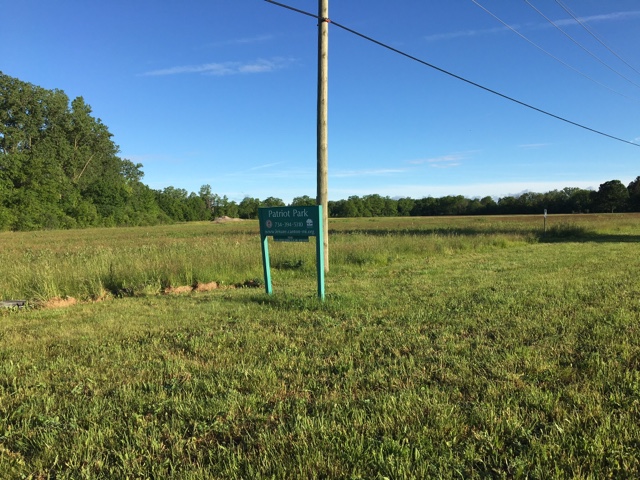 The Road to Patirot Park: 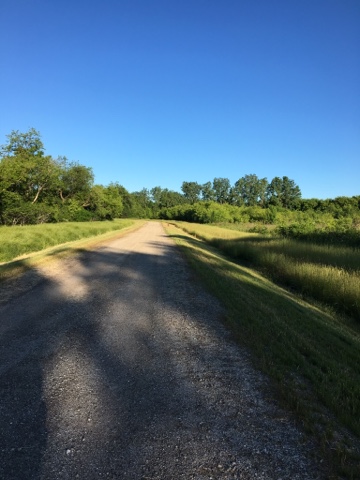 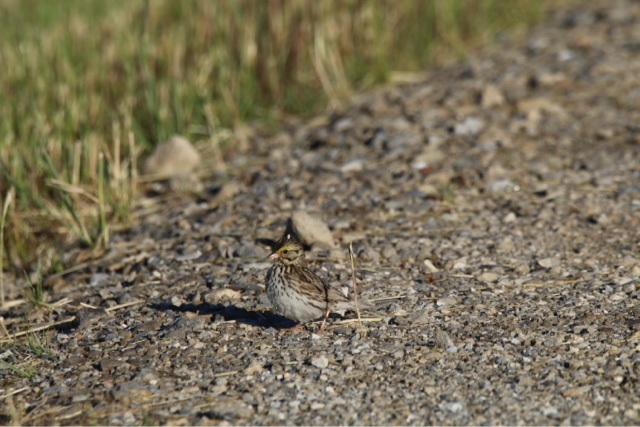 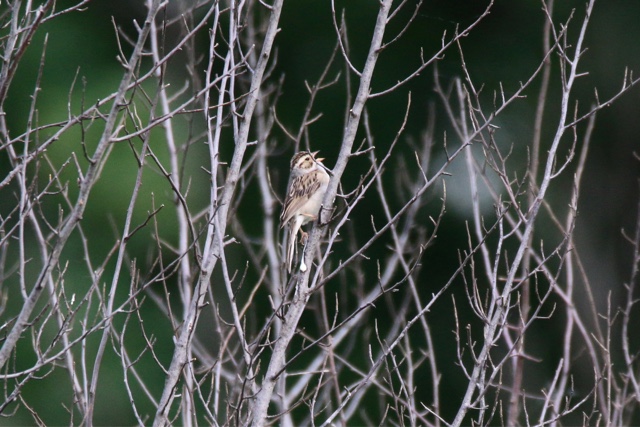 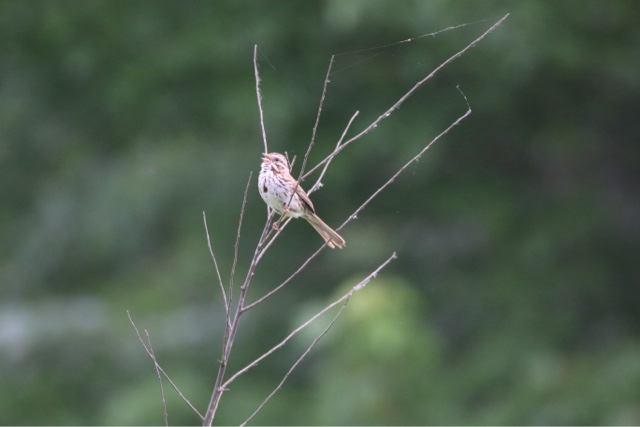 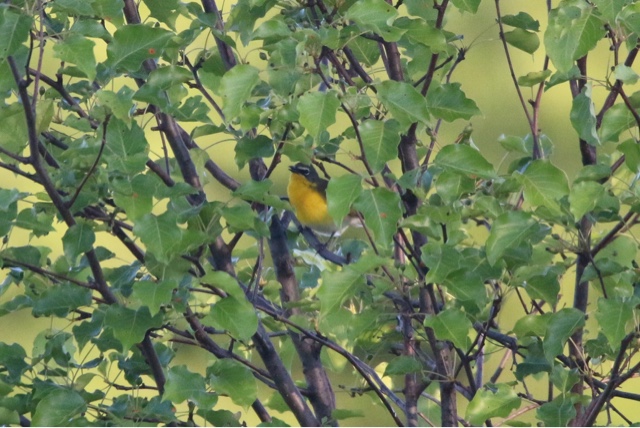 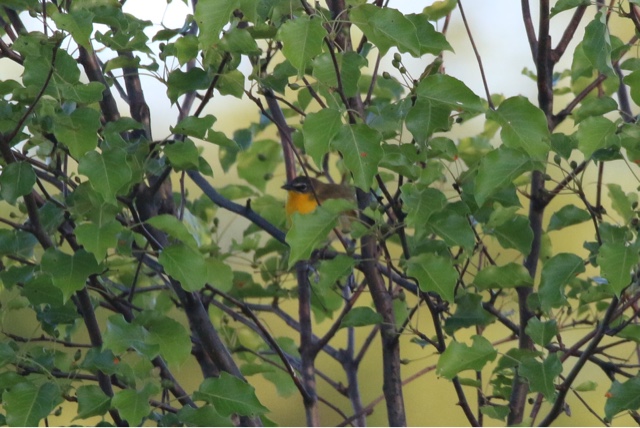 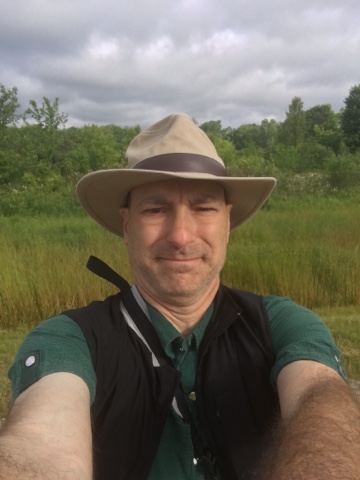