This week in Big Year Histrory:

It was this week in 2012 that I had made my first trip to the Rio Grande Valley in Texas where I passed 400 species for they year.  A modest 300 as a beginning birder had been my original goal.  I left Texas with 438 species and set my sights on 500 on my way to 596 ABA species

This year, my MLB Big Year has a goal of 500 species, as I travel all around North America with the Blue Jays.  I've passed 300 and hoped to add more in Colorado.  On the way to birding in the Denver  area I spent a couple of days looking for a Henslow's Sparrow in the outskirts of Chicago. They were, very likely, almost all gone. I think I was a couple of weeks late for seeing plenty of them, but just on time to see dozens of Bobolinks, and plenty of Dickcissels.  There are two nice spots to go birding in the Chicago area.  Close to downtown is the Burnham Wildlife Corridor, which is about a 15 minute drive from the Magnificent Mile, and Paul Douglas Forest Preserve.  The most recent sightings of Henslow's Sparrows had come from those two locations.

But that was just a prelude to my trip to Denver and my search for a Lifer, the Clark's Nutcracker.  Back in 2012 I didn't really have a chance at one as I was not able to travel to Colorado.  There had been reports of one in Nevada when I was there in July, but that didn't go anywhere.  So, with limited time to bird I decided on Echo Lake Park which is a stop along the way to Mount Evans, North America's Hightest Auto Road.  More on that later.

Echo Lake is about an hour outside of downtown Denver and high enough in the mountains that I had temporarily lost my hearing.  My first morning up there, felt like it was going to be a bust.  I knew there was a Barrow's Goldeneye in the lake and that Nutcrackers had been reported on e-Bird, but the first birds I saw were Robins, Mallards, a Ruby-crowned Kinglet and a female Red-breasted Nutchatch.  However, over the 3 hours I had up there I did add 3 new year birds.  I found my first Townsend's Solitaire outside Ontario, in the habitat they actually belong in, a Broad-tailed Hummingbird and around the other side of the lake, a female Barrow's Goldeneye.

I had planned on a different location the next day, but decided I would have a better chance at the Nutcrackers if I went back up the mountain and drove just a little higher.  I left a little earlier on Tuesday morning and at the base of the mountain, ran into a small flock of Black-billed Magpies.  A little further up the road, on a wire was a Violet-green Swallow.  Up at Echo Lake I retraced my steps from the previous day and found in quick succession 2 Gray Jays and a Cordilleran Flycatcher.  Further into the woods I heard and then found me a Mountain Chickadee.  What a difference a day makes.

At that point I decided to head further up the mountain to see if I could find the illusive Clark's Nutcracker.  As it turned out, I didn't have to go far, as adjacent to the restaurant just past the lake, is a campground, and as I was driving by heading to the road leading to Mount Evans, I heard the Nutcracker calling.  I stopped the car, almost backed into the car behind me and quickly parked the car.  I had to follow the calls into someone's occupied camp sight, but there on the ground, was a pair of Clark's Nutcrackers and ABA Lifer 647.  It was my 8th new species of the year here in Colorado and number 323 for the year.

So, after scoring the Nutcracker, I had ideas of heading further up the mountain to find Brown-capped Rosy Finches.  But as I begin the climb I noticed that the winding road coming down the mountain is a very steep drop off into oblivion.  I've driven roads like that before but I'd have had to drive so slowly back down the mountain I'd have not been back in Denver on time to drop by car off at 11:30 and get to work on time.  So, I nervously turned around and slowly skirted the edge of oblivion and made my way back down to the campgrounds, where I was treated to dozens of Broad-tailed Hummingbirds flitting around the bushes and feeders at the lodge.

As I made my way back down the mountain I stopped a couple of times by flowing rivers looking for American Dippers, but without success. Not much time to bird in the morning tomorrow, before heading back to Toronto for the next two weeks. 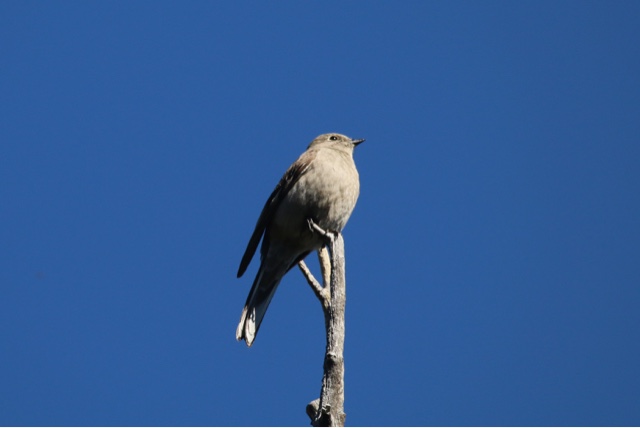 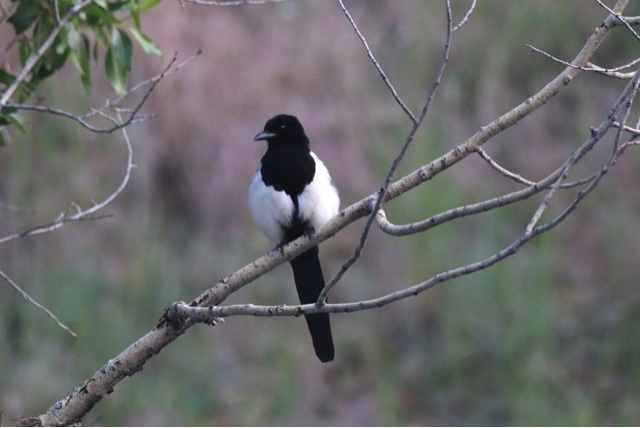 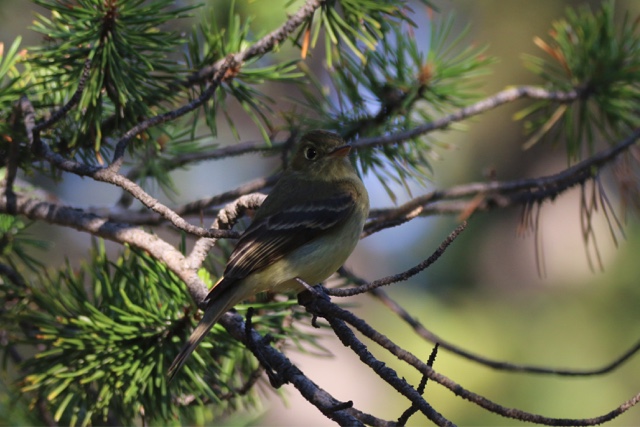 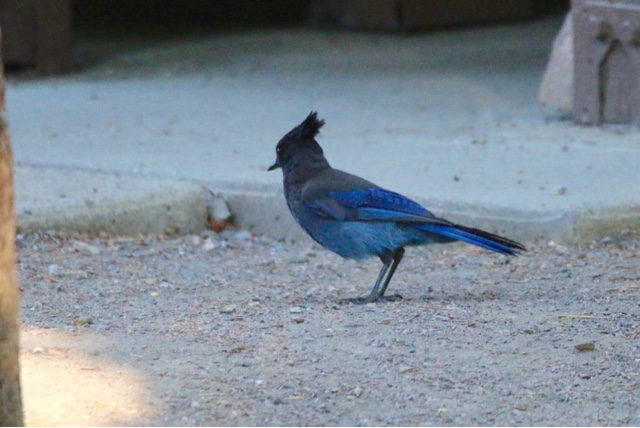 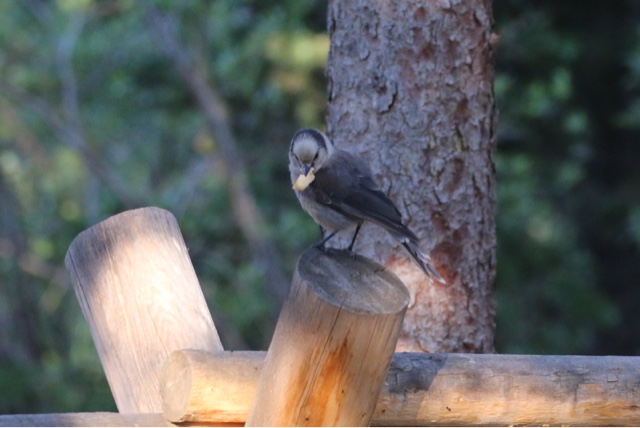 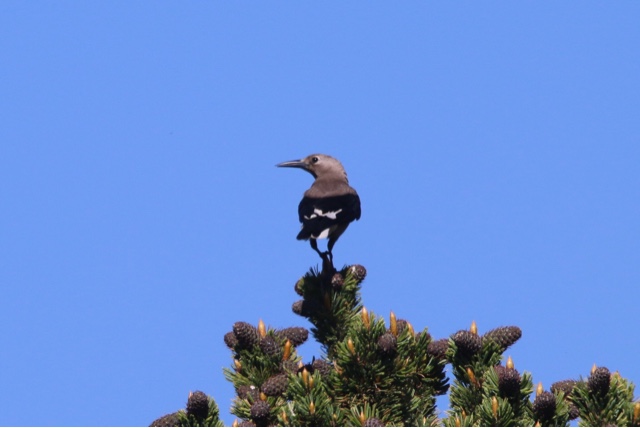 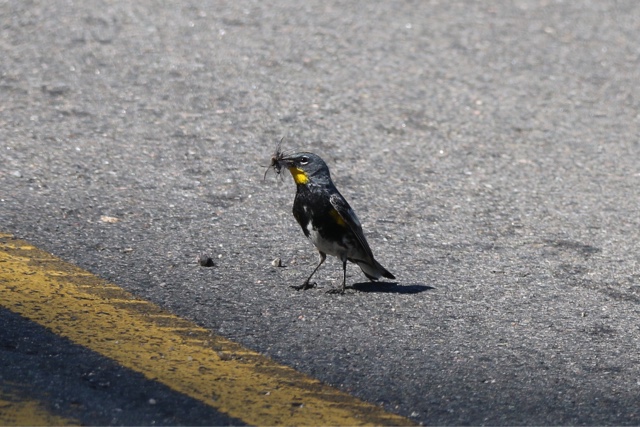