Rails Rails Rails!
And more rails.  The Yellow Rails and Rice Festival takes place in and around Jennings, Louisiana, and the star of the show was, obviously, the Yellow Rail, but along the way we saw Sora, King, Virginia and had a failed attempt at hearing a Black Rail.  There were lots of birds, field trips, fires, rides on combines and an ant attack that left me nearly drunk on Benadryl for a couple of days.
This was a bonus trip I had not initially planned to make this year.  I had hoped the Blue Jays would go on and play all the way through the World Series, which would have ended on November 2, the first day of the festival, but with their elimination in the ALCS the dates worked out to go to the festival and Donna Dittleman, the coordinator, was nice enough to grant us the last place to be filled after registration had already closed for the year.  She also granted me the same dispensation back in 2012 when I was doing my Big Year.
Day 1:
Our flight arrived too late to officially register for the first field trip to Kisatchie National Forest, but did arrive early enough to go and spend the day there, and as luck would have it, hook up for a bit with the group outing,(after getting lost a couple of times while looking for the correct spot), and be just on time for their finding a Bachman's Sparrow, which is one of the highlights of the Pineywoods trip.  The other reason to go is that this area of the Kisatchie National Forest is home to threatened Red-cockaded Woodpecker.  There are currently only about 11,000 individuals, some either in Florida,(where we saw some in January), and most in the protected areas of Kisatchie, where early in the morning or late afternoon you can see them leaving or entering their nest holes.  We were lucky enough to find four or five individuals flying around and foregoing outside their trees.  Last, but not least, was the Brown-headed Nuthatch, which also enjoys the pine forests, and we found many of those in the same field as the woodpecker.  For Sue the Bachman's Sparrow was a Lifer, inching her one species closer to passing my Life List again, after I passed her earlier in the year in Panama.
Bachman's Sparrow: 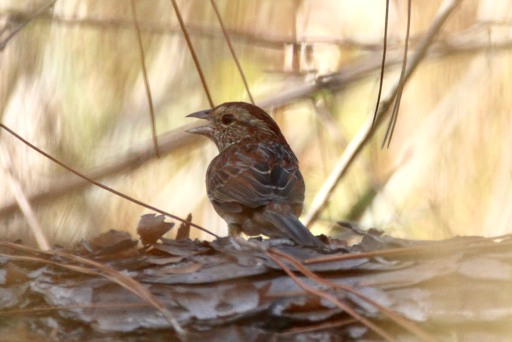 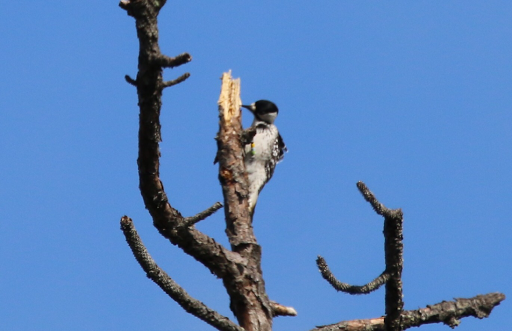 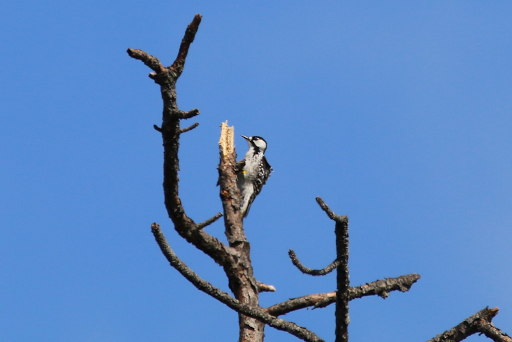 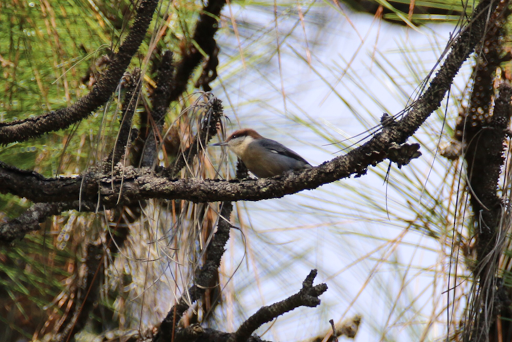 That was only the start of our day, prior to even picking up our registration for the festival.  After lunch at a local diner, where we had fried catfish and shrimp, we stopped at Cameron Prairie NWR, and then spent the late afternoon looking for the Black Rail spot, making a couple of wrong turns thanks to a GPS guide that didn't know one end of the road was not accessible by car.  We did stop along the way for shorebirds and a Loggerhead Shrike before finding the actual Black Rail spot, only to find that some idiots had set fire to the brush and a good chunk of it was burning.  I played Black Rail calls for a while but Sue, the more levelheaded of the two of us, insisted that we beat a hasty retreat before becoming trapped behind the fire line.
From there we went to a spot on Wakefield Rd in Cameron that seemed good for Seaside Sparrows, appropriately by the water, along the Gulf of Mexico.  I have searched for this bird in vain on various occasions since we couldn't find one in Cape May back in 2012.  The "Sparrow Marsh" was basically some tall grass in an industrial area, where large tractor trailers and fast driving pickup trucks were zooming by at regular intervals.  We parked the car in what seemed to be a safe spot, but would turn out an hour later not to be the case, and walked up and down the road listening for the Seaside Sparrow while also enjoying looks at White and Brown Pelicans and White Ibis flying by.  I could hear the Seaside Sparrow chip note, along with Marsh Wrens, but as the sun was setting it seemed impossible to actually spot one.  But then, at the same time in different locations, both Sue and I spotted one.  She came over to tell me about hers and I was able to have her find mine.  We got good looks at it through the grass and even some photos.  There was a second bird in with them and it turned out to be a Nelson's Sparrow, of which I finally got a photo, though nothing I would submit to National Geographic, or even share outside of this blog.  Sue missed the Nelson's but did count, as I did, the Seaside as a Lifer, so she gained no ground on that bird.
Seaside Sparrow: 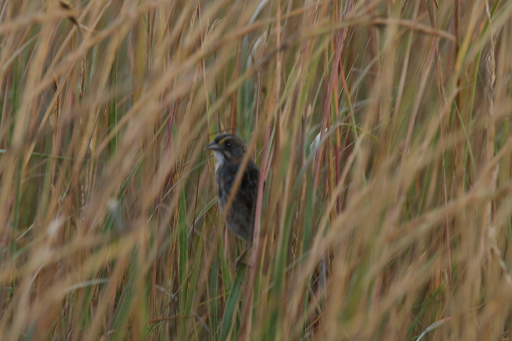 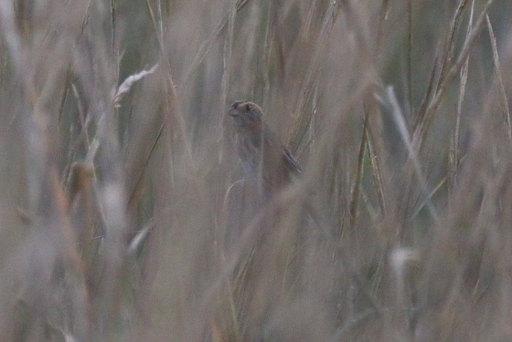 It was at that point that we went back to the car only to find that the tide was coming in and we had parked, basically on a old boat launch.  Our rental car was now sitting in about a foot of water on the drivers side and maybe six inches on the passenger side.  I tiptoed through the waster on the passenger side and slid in across the center console and for the second time that day beat a hasty retreat before the tide came in any further. 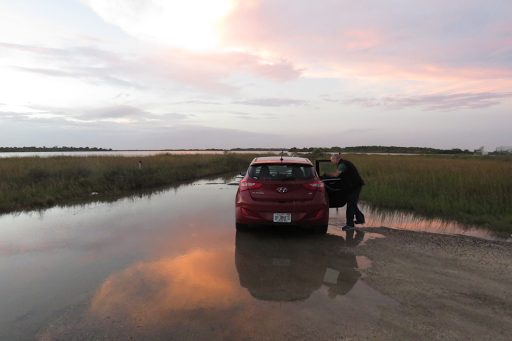 From there we drive to the Hampton Inn, where we picked up our badges and loot bags full of rice,(naturally), and organic coffee,(because it's bird friendly and shade grown, I think), and then drove half an hour to the Holiday Inn Express about 30 minutes from Jennings, since I had enough points to get free lodging for the festival.
Day 2:
The first official day of the festival was the only day we got to sleep in past seven in the morning, as the Welcome Reception didn't begin until 9:30am at Mike's Seafood Steakhouse.  There we learned about rice production, rail spotting etiquette in the rice fields and given safety instructions so as not to be thrashed in the blades of, or run over by the combine.  No one wants to be a sad footnote in the Yellow Rails and Rice newsletter next year.
They provided lunch for the first day in the field and we headed out to the farms where rice would be harvested, eventually, and rails would flee from the oncoming combines, some of  be caught in the mist netting so local ornithologists could geotag the rails as part of their ongoing study of this secretive bird.  They are far ranging, and breed in Northern US and Canada,(Carden-Alvar in Ontario), and pass through Louisianas rice fields on their way to wintering grounds in warmer coast regions such as Florida and Texas.  The Geotags allow the researchers to monitor their movements and see how many remain in Louisiana and how far individuals travel over the course of their lives.
Compared to my trip in 2012, the rice fields were relatively dry, but the temperatures were still relatively hot.  We arrived only to find that the combine that would be harvesting the rice had broken down and a second one had to be sent for.  This caused a lengthy delay, but we passed the time enjoying flyovers by hundreds of Greater White-fronted Geese, White-faced Ibis and Ross's Geese, along with Red-tailed Hawks, a Black Vulture and Northern Harrier.  As the morning turned to afternoon, we decided to eat our lunch and were going to head out to another location to bird, when in the distance I saw the replacement combine heading our way.
It was finally  time for rice and rail harvesting!   Now, to those of you out there that think this a cruel way to view Yellow Rails, be assured that, no rails are harmed during the harvesting, and that the rails choose to be in the rice fields and would be flushed regardless of whether birders were there to view them or not.  Not only is it fun, and a great way for birders to get their Life Yellow Rail, but it provides a valuable opportunity for ongoing research and study of the birds.  However we just wanted to see them, and that is best done by walking along side the combine as it harvests the rice and flushes the rails.  Along with the Yellow Rails, there are also Sora, Virginia and King Rails also hang out in the rice fields.  However, if a Yellow Rail is flushed the combine driver will honk his horn to alert all birders of the sighting.  Then it is time to attempt photographs and look for the field marks that identify the Yellow Rail, namely white showing on the wings as it flies.  We were lucky and saw our first birds within a few minutes of the harvesting.  For Sue, another Lifer.  That first day we also saw a few Virginia Rails and the second prize bird of the harvesting, a King Rail, another Lifer for Sue.  In 2012 we did not see a single Yellow Rail on the first day, and no King Rails during the festival.  Sue wanted to ride the combine, but since her ride number was 72 of 72, she would have to wait until the next day.  Before heading back to the hotel for the night we stopped at Louisiana Oil and Gas Park, where a plaque and tribute to the pioneers of the oil industry in Louisiana stands, along with more Red-winged Blackbirds than I've ever heard in one spot.  We did not see them all, but our guess was there was something like between 400 and 1000 of them hiding and squawking in the trees, bushes and upon the wires.
Yellow Rails: 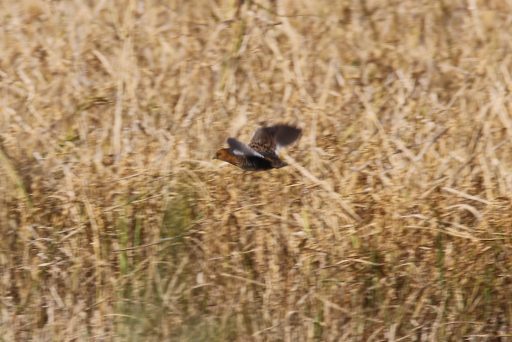 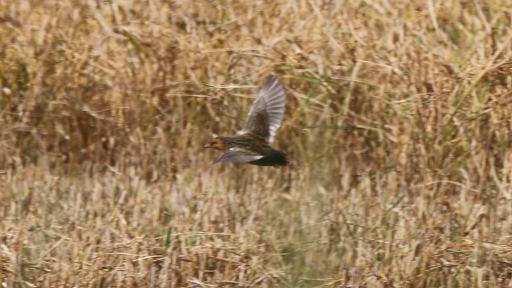 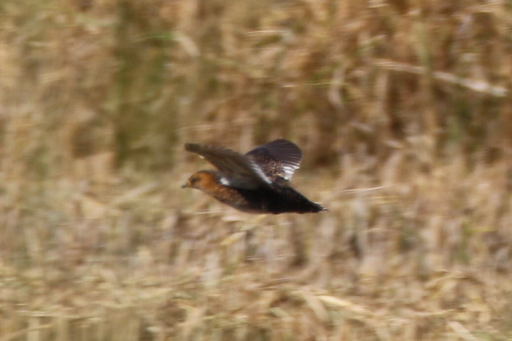 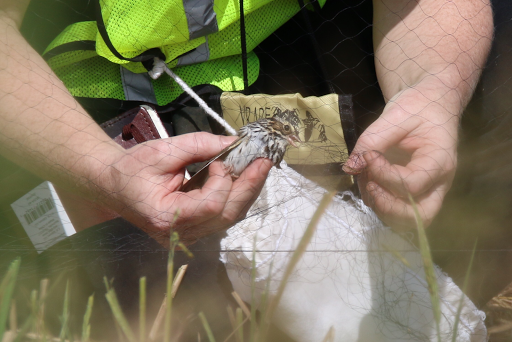 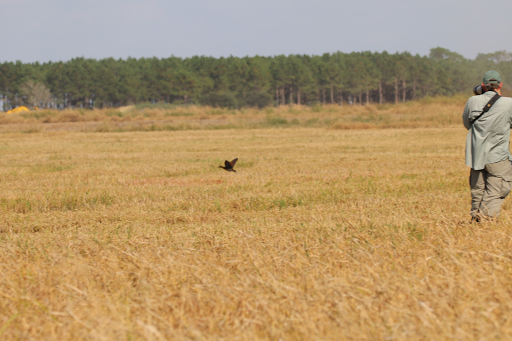 Day 3:
The next day's activities started early.  We had to be at the Hampton at 6:45 to meet the group for our field trip group that was to take us on an outing in and around the farm lands and eventually end up at the rice fields after lunch.  Stop one was familiar to me from my 2012 visit.  An old runway, in Thornwell along Aguillard Road, where sometime in the past planes landed, likely for crop dusting, but where, also, sometimes, there are Sprague's Pipits.  As we walked the runway, where there were no pipits, we were treated to flyovers of hundreds of White-aced and Ibis and dozens of Greater White-fronted Geese,(another Lifer for Sue), Northern Pintails and White Ibis.  Our next stop was Lake Arthur. Where along Marceaux Road thousands of Greater-white Fronted Geese, hundreds of White-faced Ibis, dozens of Snow Geese and even a few Ross's Geese.  We added a Gull-billed Tern,, Franklin's Gull and even an American Golden Plover to our lists.
The best stop of the day was a farm along Highway 14 not far from the rice fields where Barn Owls roost.  Our goal was to see them, as we walked through the pine woods.  And see them we did as they flew around us and over the trees.  Photographing them in flight from the woods was another issue as we just couldn't find one roosting out in the open.  However seeing five Barn Owls was a hoot, so to speak.
It really is a Barn Owl: 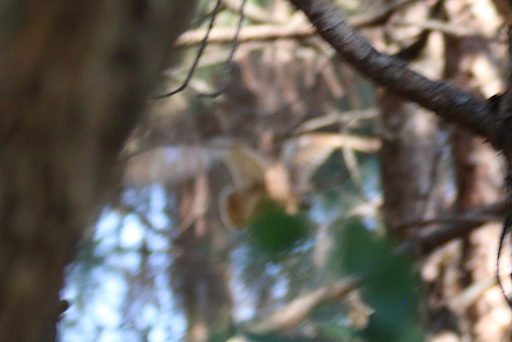